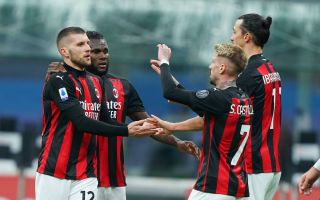 After Inter and Juventus took care of business, the pressure was on Milan to prove their title credentials with a convincing win against Crotone, and they did just that.

As il Corriere della Sera writes this morning (via MilanNews), Milan have started the month of February in the best way after some difficult in January, that is with a 4-0 victory against Crotone.

It is true that the opponent are rock bottom, but Pioli’s side showed strength of character to overcome not having Bennacer, Calhanoglu, Kjaer and Brahim Diaz in order to win very convincingly.

The four goals are a good message from Milan to Inter and to the whole league as they reclaimed top spot from the Nerazzurri, who had beaten Fiorentina on Friday and had overtaken the Rossoneri. In the next round Milan will play at Spezia, while Inter will host Lazio at San Siro, so the hope is that the gap could even be widened before the derby the game after.

Zlatan Ibrahimovic was the headline make again on Sunday as he scored a brace (his sixth this season), reaching and exceeding the milestone of 500 career goals with club sides. Also noteworthy are Rebic’s two goals, both of which arrived from Calhanoglu  assists.