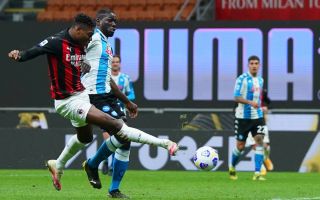 CorSera: Milan’s attack dries up as they begin to lose battle against injuries – something must change

AC Milan continue to battle injuries as they reach the decisive stage of the season, but the goals have begun to dry up and that is a worry.

As il Corriere della Sera writes (via MilanNews), nobody has played as many times as Milan, who have played 41 games in all competitions this season. As Pioli said: “Imagine Inter without Lukaku, Lautaro and Sanchez or Juve without Cristiano Ronaldo, Morata and Chiesa.” Imagine that situation for months and months, and it becomes tough to get through.

“Changing the starters changes the quality and at certain levels it is difficult,” Paolo Maldini, admitted thus highlighting the unsustainability of this unpleasant situation. Injuries and Covid have been a thorn in Milan’s side and even if before they seemed able to get through it with positive results, the attack has dried up now without Zlatan Ibrahimovic’s goals.

Rafael Leao does not have the right composure in front of goal and hasn’t scored since early January, while Mario Mandzukic has less than 160 minutes played since joining. Ante Rebic on Sunday returned from yet another physical mishap, but managed to get sent off. Milan’s forwards have scored one goal in the last nine games – it is clear something must click, and fast.