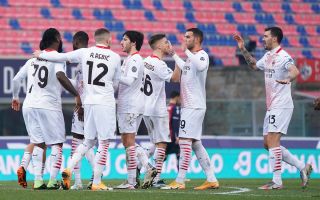 The two consecutive defeats, between the league and the Coppa Italia, had generated a bit of anxiety for Milan, but they responded well yesterday. Beating Bologna 2-1, they remain at the top of the standings ahead of Inter.

As Corriere Della Sera highlights (via MilanNews), the response was one of an adult as big teams also win in this way, suffering, sweating and gritting their teeth. And they are still holding onto first place, which they have deservedly since the first round.

The success vs. Bologna is yet another tough exam passed, and the fact that they held up after Andrea Poli’s goal, also goes to show the growth of this group. In short, it was a victory that showed character. Without it, it would have been tough.

Milan, therefore, have restarted and they did it as a mature team. Now, Crotone and Spezia await, before the derby on 21 February (which will be played between the two Europa League matches against Red Star). A crucial month ahead.