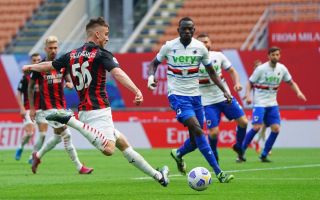 CorSera: Milan’s worrying involution continues – the cause is technical, tactical and psychological

AC Milan stumbled once again at San Siro on Saturday against Sampdoria and now the Champions League race has become complicated.

As il Correre della Sera writes (via MilanNews), the 1-1 against Samp was the latest disappointment in a 2021 that started badly and is continuing very badly, making the road to the real target this season – a top four finish – more and more of an uphill battle.

With nine games to go there are six teams in the race, and second to seventh place are separated by just nine points. If Milan do not sort out their home form having gone six games in all competitions without a win, the Champions League dream will become practically impossible.

The paper describes the ‘evident involution of the team’ as ‘worrying’, adding that the reasons are ‘technical, tactical and psychological’. In short, there is a bit of everything contributing to the struggles and that is without looking at the performances of Ibrahimovic, Calhanoglu and Kessie from yesterday, three pillars of Pioli’s formation.

Against Sampdoria we saw the worst side of Milan with plenty of errors, so what was supposed to be the beginning of a favourable run of games with Parma, Genoa and Sassuolo to follow turned out to be a false start.