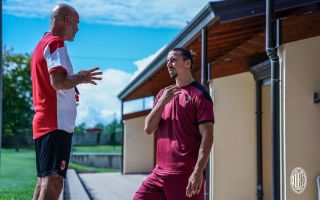 CorSera: Pioli and Ibrahimovic address the squad after Cagliari disappointment – what was said

Zlatan Ibrahimovic and Stefano Pioli tried to lift the team after Sunday’s 0-0 draw against Cagliari ahead of the Champions League decider against Atalanta.

According to il Corriere della Sera (via MilanNews), the leaders of the Rossoneri have decided that this is not the time for trials and the hope, of course, is that there is no need to do them after Bergamo. Milan’s squad need solidity and confidence to face Atalanta with the awareness of being able to win and being in charge of their own destiny.

After the last, disappointing home draw, Mr. Pioli tried to charge his team: “Let’s raise our heads, we are not the team of the 0-0 against Cagliari, we are the team of the 3-0 against Juventus” is the summary of the speech that the coach made to the players when training resumed. The personality and the composure of a great team was missing at the weekend though, and a leader like Ibrahimovic was missing too.

The injury will force him to miss the match in Bergamo, but Zlatan will still make himself heard, as he is already doing. Right after the game at San Siro, the Swedish champion encouraged his team-mates, recalling that the Champions League is still in their hands.