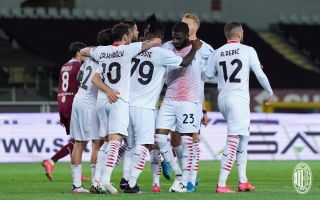 CorSera: Pioli rediscovers his young, ruthless and winning Milan – top four is one step away

AC Milan know that with one final push they will be able to confirm their place in next season’s Champions League.

As reported by il Corriere della Sera (via MilanNews), the Champions League is really one step away. The 7-0 victory against Torino brought Milan even closer to the finish line and at this point the Rossoneri would just need to beat Cagliari at San Siro on Sunday to be almost certain of qualifying for the top European club competition.

A final, decisive effort is needed to complete a mission that Milan complicated themselves with a disappointing second round, but the last three consecutive games have shown they deserve it with 3 wins, 12 goals scored, 0 conceded and two huge victories in Turin against Juventus and Torino, whom they had not beaten away from home since 2010 and 2012 respectively.

In the first half of the season Milan were young and light, ruthless and winning and the clues suggest that the confidence is back. Theo in great shape, Kessie dominant, Diaz inspired, Rebic lethal: without Ibrahimovic it’s never easy, but Pioli can smile for having found his best men.