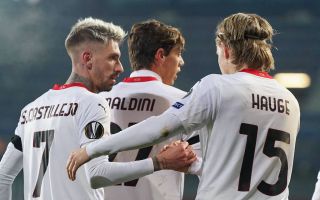 CorSera: The players change but not the result – Milan 3.0 win in Prague and top the group

With qualification for the knockout stages already secured, Stefano Pioli used the chance to rest and rotate during Thursday’s win over Sparta Praha.

As il Corriere della Sera reports (via MilanNews), if the Milan side in Genoa against Sampdoria – without Kjaer, Bennacer and Ibrahimovic – is considering Milan 2.0, in the Czech Republic version 3.0 was seen.

There were 10 changes made to the starting XI compared to the previous league match against Sampdoria, but in the end Milan took home the three points last night as well. Thanks to the simultaneous defeat that Lille suffered at Celtic, the Rossoneri finished first in Group H.

Therefore, it was yet another very positive evening for the Diavolo who – for the first time in their history – fielded four players born after 1 January 2000.

In short the players changed, but not the result. The decisive factor was once again Jens Petter Hauge, who scored the winning goal with his usual movement and a very precise right-footed shot.

Pioli had good responses from other players such as Kalulu, who was on his debut with Milan, and from Tatarusanu who made a big late save against Karlsson. Milan are a real team and they proved it last night against Sparta.