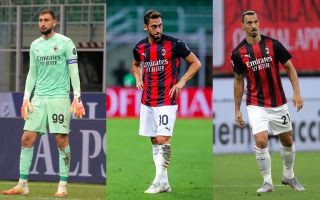 CorSera: Three renewals prioritised as Milan continue to prepare for next season

In addition to bringing in some reinforcements, Milan are also working on locking down their important players. Above all, the focus is on the players with little left on their contracts, which is understandable.

According to Corriere Della Sera (via MilanNews.it), taking stock of the Rossoneri’s transfer window, the current priority is to renew the contracts of Gigio Donnarumma, Hakan Calhanoglu and Zlatan Ibrahimovic.

All three are very important for Stefano Pioli’s side and it’s not strange that Paolo Maldini and Ricky Massara want to keep them. The Swede’s contract will expire at the end of this month and negotiations are underway to extend it for one more year.

As for Donnarumma and Calhanoglu, there is a bit more time as they will expire in 2021, though it’s crucial to reach an agreement before January. Should they fail to do so, then the duo will be allowed to enter into talks with other clubs.

READ MORE: Milan flop Laxalt could return to Genoa but there is one obstacle