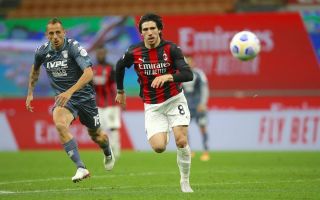 CorSport: Cagliari want Tonali and are ready to negotiate with either Milan or Brescia

Cagliari are ready to make an attempt to sign Sandro Tonali regardless of whether he is bought by Milan or not, a report claims.

Milan beat the competition to sign Tonali last summer on a loan with option to buy deal from Brescia, but numerous sources have suggested recently that the Rossoneri are looking for a discount on the €15m option previously agreed, which has slowed his permanent transfer.

According to il Corriere dello Sport (via MilanNews), Cagliari are ready to move for Tonali, both in the event that the player is bought by Milan and in the event that the Rossoneri decide not to spend the amount million necessary to keep him at San Siro and therefore he returns to Brescia.

The Sardinian club are ready to guarantee the young player a leading role in view of next season, considering that the midfielder has every intention of getting back into the plans of the Italian national team after a difficult season.

READ MORE: Ramadani at Casa Milan to talk with Maldini – Under, Pjanic and the other topical names