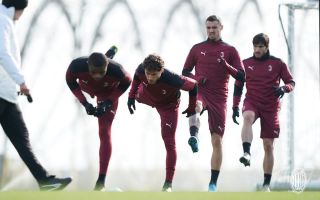 CorSport: Calm atmosphere in training despite Spezia disaster – the defeat was analysed

As was to be expected, there was no overreaction at Milanello following Saturday’s disappointing 2-0 defeat to Spezia.

According to what is being reported by il Corriere dello Sport (via MilanNews), the first training session of an intense week took place yesterday, and despite a poor result at the weekend there were no alarm bells ringing.

This is a crucial point of the season as Milan play Red Star in Belgrade on Thursday before a huge game against Inter on Sunday afternoon. Despite this, training apparently took place in a calm and serene atmosphere.

There was no ‘hairdryer treatment’ given to the team by Stefano Pioli, but just a normal meeting with the group to analyse the reasons for the defeat against Spezia. The team and staff are aware that they were well off the boil in the game against the Ligurians but are equally convinced that an immediate reaction will come in the next two matches.