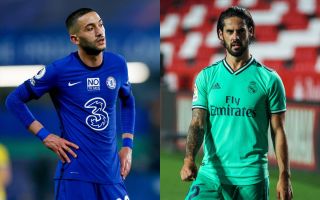 Milan are looking for a new playmaker on the market after the departure of Hakan Calhanoglu. Brahim Diaz is set to return but he won’t be enough, considering that he was the only alternative this past season.

According to today’s edition of Corriere Dello Sport, as cited by MilanLive, Paolo Maldini and Ricky Massara have narrowed down their list of targets to two names. The players in question are Hakim Ziyech and Isco.

The Morrocan could perhaps be allowed to leave Chelsea on loan towards the end of the market, but it remains to be seen if Milan can wait that long. As for the Spaniard, he seems to be out of Real Madrid’s plans and could thus leave.

The right formula for that operation could be a loan with an option to buy, but the main obstacle is the salary of the player (he wants €9m per year). Obviously, this is too high for the Rossoneri who can only make a move if the demand changes.