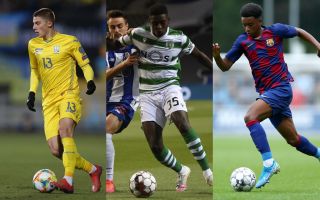 Among other things, Milan need to bring in a left-back before the transfer window closes. Theo Hernandez is the undisputed started but as the Rossoneri will feature in three competitions, he can’t play every game.

Stefano Pioli currently has Diego Laxalt at his disposal for this role, but the Uruguayan is expected to leave the club after failing to impress on the management. By the looks of it, Milan want to focus on a young profile for the role.

According to Corriere Dello Sport (via Milanlive.it), there are three names on Paolo Maldini and Ricky Massara’s shortlist. The first is the 21-year-old Ukrainian Vitaliy Mykolenko and Milan have already made initial contacts through intermediaries.

Then there is the Nuno Mendes option. The 18-year-old plats for Sporting Lisbon and could become a concrete target for Milan. However, they need to watch out for the competition as Arsenal also are interested.

Finally, the most recent addition on the list is Alejandro Balde. The 17-year-old plays for Barcelona’s youth team but many believe that he’s ready for the big leap. One thing is certain, the Hernandez deputy will be a young player.