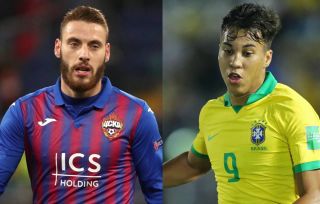 AC Milan are quickly looking to turn six summer signings into eight by reinforcing the attack with two more pieces, a report claims.

The club are also set to welcome two other signings as both Brahim Diaz and Fodè Ballo-Tourè landed in Italy yesterday. Today they will sign officially with the Rossoneri and will be announced as the latest recruits in a summer transfer campaign that has already seen Maignan, Tomori, Tonali and Giroud arrive.

According to this morning’s edition of il Corriere dello Sport (via MilanNews), Milan are not finished there and have two more signings in mind to potentially complete the attacking department as Kaio Jorge of Santos and Nikola Vlasic of CSKA Moscow are being lined up.

The former would arrive as the third striker and would learn from the experienced duo of Zlatan Ibrahimovic and Olivier Giroud, while the latter would be the new attacking midfielder to replace Hakan Calhanoglu and will compete with Brahim Diaz for a starting spot.

The young Brazilian could arrive immediately with Santos asking for €10m, while for the Croatian – who wants to join Milan – CSKA Moscow must be persuaded to sell him on loan with option to buy.