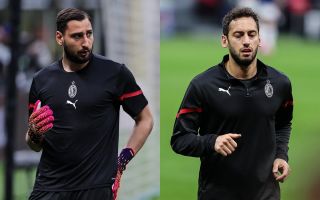 CorSport: Milan will honour renewal offers for star duo even without Champions League

Milan have been working on the renewals of Hakan Calhanoglu and Gigio Donnarumma in the last few months, as both will expire in the summer. There isn’t much time left, though, and a solution is yet to be found.

According to today’s edition of Corriere Dello Sport, as cited by MilanNews, the matter has been put on hold until the end of the season. Of course, getting Champions League could improve the Rossoneri’s chance of renewing the star duo.

Having said that, even without a top-four finish, the offers that have been made already will remain valid and it will be up to Calhanoglu and Donnarumma to decide. Meanwhile, Milan are already working on alternatives.

Paolo Maldini and Ricky Massara don’t want to be caught unprepared and although it would be a huge blow to lose the duo for free, they won’t dwell on it. In any case, the game against Atalanta on Sunday will be very important.

READ MORE: Trio could leave as Milan look to bolster the attack with three signings – the details