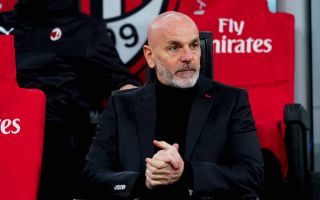 CorSport: Pioli flattered by comparisons with Mancini’s Italy – “This is certainly our mentality”

AC Milan head coach Stefano Pioli has agreed that there are certain elements of his side that are similar to Roberto Mancini’s Italy.

Milan will face off against Cagliari tonight looking to build from their win in the first game of the season, when a solitary goal from Brahim Diaz inside the opening ten minutes plus a resilient defensive effort secured a 1-0 victory over Sampdoria at the Marassi.

This morning’s edition of il Corriere dello Sport (via MilanNews) speaks about Pioli and Milan ahead of tonight’s game against Cagliari, remarking how the Rossoneri have been tasked with keeping up with the early pace-setters Inter after they won again on Friday night.

In addition to that, the coach was asked during yesterday’s press conference if he sees any similarities between his team and the way the Italian national team play under Roberto Mancini.

“It is a good comparison, we hope to be able to obtain the same results. This is certainly our mentality in enthusiasm. Milan’s historical past must not be a burden but a stimulus, we will play to give our best and try to win,” he said.

READ MORE: All Milan’s attention on Faivre – Brest signed to giving in as Rossoneri have key ally