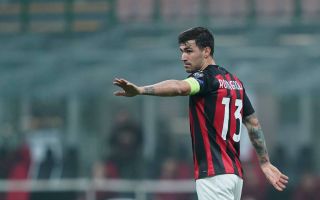 CorSport: Romagnoli sidelined with another muscle injury – he could miss two crucial games

There was yet more bad news for Alessio Romagnoli as he was forced to withdraw from AC Milan’s 2-2 draw with Hellas Verona after an injury during the warm-ups.

The captain has only just recovered from a calf injury that kept him out for three months, but news filtered not long before kick-off that Romagnoli would miss Sunday night’s game due to a flexor muscle problem, meaning he had to make way for Matteo Gabbia.

According to il Corriere dello Sport (via MilanLive), Romagnoli has suffered a resentment of his thigh flexor, one of the most common muscle injuries. In the next few hours Romagnoli will carry out the usual control tests to assess the extent of the damage.

The paper claims though that it is likely he will need at least 15-20 days of rest, but a lot will depend on his general muscular condition, but regardless Romagnoli will certainly miss international duty with the Italian national team.

However, it does mean he is also be at risk for the crucial games against Napoli and Lille at the end of November.