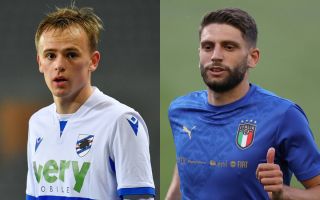 Milan are looking for a right-winger on the market as Samu Castillejo could leave the club this summer. This past season, that position wasn’t very prolific and the Rossoneri want to change that.

According to Corriere Dello Sport, as cited by MilanLive, there are two names at the top of Milan’s transfer wish list: Domenico Berardi (Sassuolo) and Mikkel Damsgaard (Sampdoria). Two players that have done well at the Euros.

Berardi is a right-winger and has had several successful years with the Neroverdi, now ready to make the big leap in his career. Damsgaard is still very young and can play in every position in the attacking trio.

Having said that, they both cost a lot. Sassuolo have slapped a price tag of €40m on Berardi but could perhaps accept technical counterparts. The same goes for Sampdoria although they have a price tag of €30m.

In order to make a deal for either of them, therefore, Milan might have to include some counterparts and the usual suspects are Andrea Conti, Mattia Caldara, Rade Krunic and Samu Castillejo.