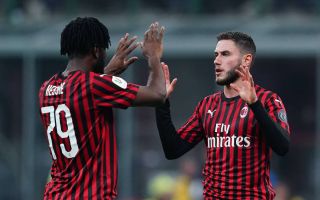 A crucial duo are moving towards signing new contracts with AC Milan which will include a pay rise, according to a report.

The Rossoneri management will be wary of avoiding a similar situation to the one they are currently facing regarding Gianluigi Donnarumma and Hakan Calhanoglu – two players who are key to the team but have been allowed to get within six months of their contract expiry.

According to what is being reported by il Corriere dello Sport (via PM), Davide Calabria and Franck Kessié – who are under contract until 30 June 2022 – are expected to extend their agreement with the club.

That will mean pushing the deadline beyond 2022 (though no duration of contract is mentioned) but will also see both net a pay rise as a reward for becoming key pillars of the squad in recent months.

Talks between the management of the Diavolo and the agents of Calabria and Kessié have begun.