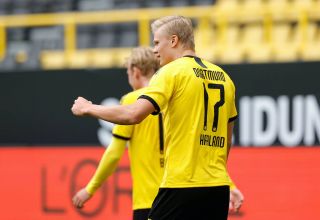 AC Milan gave serious though to triggering the release clause of Erling Haaland during the January transfer window, a report claims.

Haaland was in red-hot form at Red Bull Salzburg during the first half of the season which earned him a move to Borussia Dortmund, where he has 10 goals and three assists in nine Bundesliga games.

However, it could have been a different story. According to il Corriere dello Sport on Monday (via Calciomercato.com), Milan thought seriously about trying to pay the release clause of the 19-year-old to sign him from Salzburg.

Despite the idea regarding the Norwegian striker, the Rossoneri club pulled out of the race because the commissions and engagement offered by Borussia Dortmund to Raiola and Haaland were unmatchable.

The same paper claimed back in December that Milan’s interest in the teenage striker was serious, and that they were ready to pay his €30million release clause, with Maldini prepared to pitch a five-year contract worth €5.5million plus bonuses (€27.5m) – so a package of almost €58m.