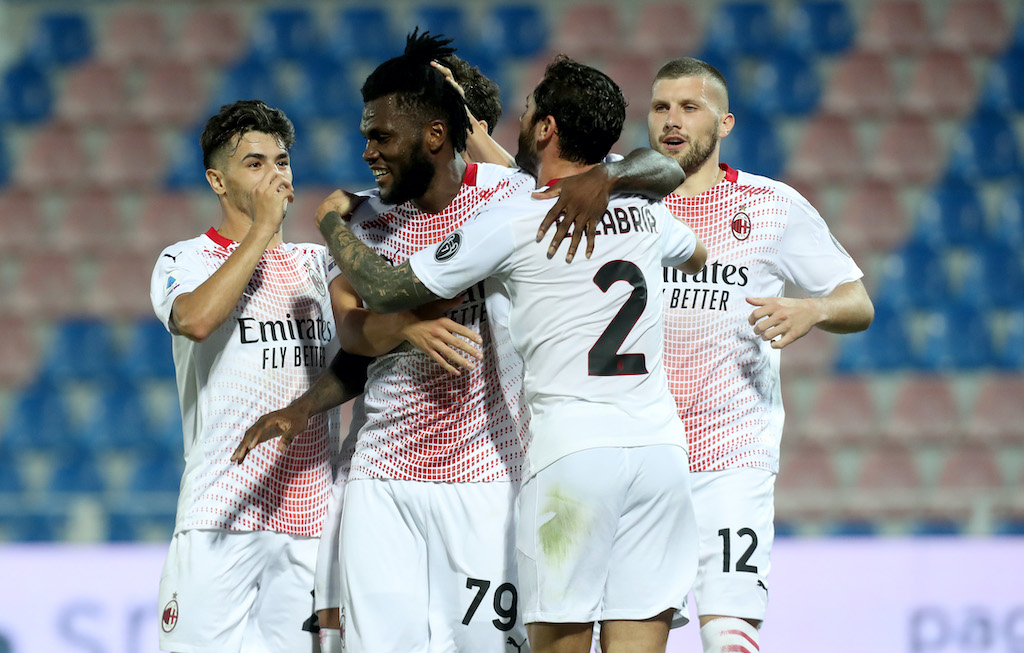 AC Milan made it two wins from two in Serie A as they saw off Crotone 2-0 at the Stadio Ezio Scida on Sunday evening.

Just like on Monday night in the league opener against Bologna, it was a goal in each half that did the business for the Rossoneri.

The first came via the penalty spot as Ante Rebic was fouled with Franck Kessie taking on the responsibility and scored, while Brahim Diaz got a second from close range not long into the second half.

The result extends Milan’s unbeaten Serie A run to 14 games and stands them in good stead ahead of the next league encounter with Spezia at San Siro.

Stefano Pioli – who was unable to call upon Zlatan Ibrahimovic, Leo Duarte, Alessio Romagnoli, Mateo Musacchio and Andrea Conti – named Brahim Diaz and Sandro Tonali in the starting XI for the first time.

Crotone had the first half chance of the game inside a minute as Massias Jr. let fly from distance, but his effort was fired comfortable wide.

With Ibrahimovic out a lot of the responsibility fell upon Hakan Calhanoglu’s shoulders, and he forced Cordaz into a good low save at his near post after a stinging effort from just outside the area. From the resulting corner Simon Kjaer flicked the ball to Diaz at the far post, but the Spaniard couldn’t fire goalwards and instead hit it across the face of goal.

Tonali was very close to assisting fellow first-time starter Brahim Diaz in the 14th minute as he rolled the ball into the path of the Real Madrid loanee, whose shot was again saved low at the near post by Cordaz.

Milan continued to dominate the chances and Cordaz again was forced to dive to his right in order to collect a shot from Calhanoglu just inside the area, though it was a much more comfortable save than the previous two.

Pioli’s side were inches away from taking the lead not long after as Kjaer’s header from a whipped corner bounced into the ground and up onto the crossbar.

The Rossoneri continued to dominate the ball but found it tough to break down what was effectively a five-man defence from the hosts, though the press did still prove to be effective in penning the Sharks into their own third.

Eight minutes before the break Ante Rebic – who had been feeding off scraps – almost got onto a through ball from Brahim Diaz, but the veteran Cordaz came off his line well to collect just before the Croatian arrived.

Milan had a half chance before the break as a free-kick from Calhanoglu was whipped onto the penalty spot where Gabbia should have arguably done better than a glanced header which went wide of the far post.

Right on the stroke of half-time though, Milan were awarded a penalty. A smart ball over the top from Theo Hernandez found Rebic who controlled immaculately with his shoulder and was brought down inside the area, and after a VAR check the spot kick was confirmed. Franck Kessie sent Cordaz the wrong way with what was a perfect penalty into the top right corner.

In the 50th minute there was a moment to remember for Brahim Diaz, who fired in his first goal for the Rossoneri in official competitions. Some nice link-up play down the right involving Calhanoglu and Saelemaekers saw the former bundle a ball towards Brahim, who spun and fired home from close range when he couldn’t really miss.

There was a moment of worry for Milan in the 56th minute as Rebic went down in a heap as Tonali led a counter-attack for Milan, and it became apparent from the pictures that he had dislocated his elbow. He was replaced by Lorenzo Colombo, who got his first goal for the club on Thursday night.

Just after the hour mark Pioli made two changes as Ismael Bennacer and Samu Castillejo came on in place of Tonali and Saelemaekers.

The game then became scrappy as Milan just looked to see Crotone off, though the hosts kept launching balls into the box with Theo Hernandez twice getting caught in the face before being booked.

Inside the final 10 minutes there was further opportunity for Pioli to rotate as Rafael Leao and Rade Krunic came on for Brahim Diaz and Hakan Calhanoglu.

Leao almost got Milan’s third after a fantastic solo run but he perhaps should have pulled the trigger and shot earlier, though the loose ball then fell to another substitute in Krunic who hit the bar with his effort.

Colombo fired wildly wide in the closing stages from inside the area in what was the last incident in the game as the three points headed back north to Milan.