Cunning changes save a lacklustre start: Tactical analysis of Milan’s win over Verona

AC Milan manufactured a miraculous turnaround at the San Siro thanks to goals from Giroud, Kessie and an own goal from Gunter, beating Hellas Verona 3-2.

Verona have always been a very tricky side for Milan to beat and last season Milan fans saw a gritty Verona side take a 2-0 lead only for the Rossoneri to end up snatching a draw late in the game. Heading into the encounter, Milan had actually drawn four of their last five home games against the Gialloblu.

It seemed that lightning had struck twice when Verona went up 2-0 inside 30 minutes thanks to goals from Caprari and Barak but Milan had an answer to everything Verona threw at them this time around. Here is an analysis of the match…

Milan have established an identity as a team that presses well off the ball but against Verona the pressing was existent and some-times in-cohesive. There was already warning signs before Caprari’s goal before this.

This had Caprari and Barak coming to play as inside forwards behind Kalinic trying to take advantage of their three-man defensive structure and narrow formation. 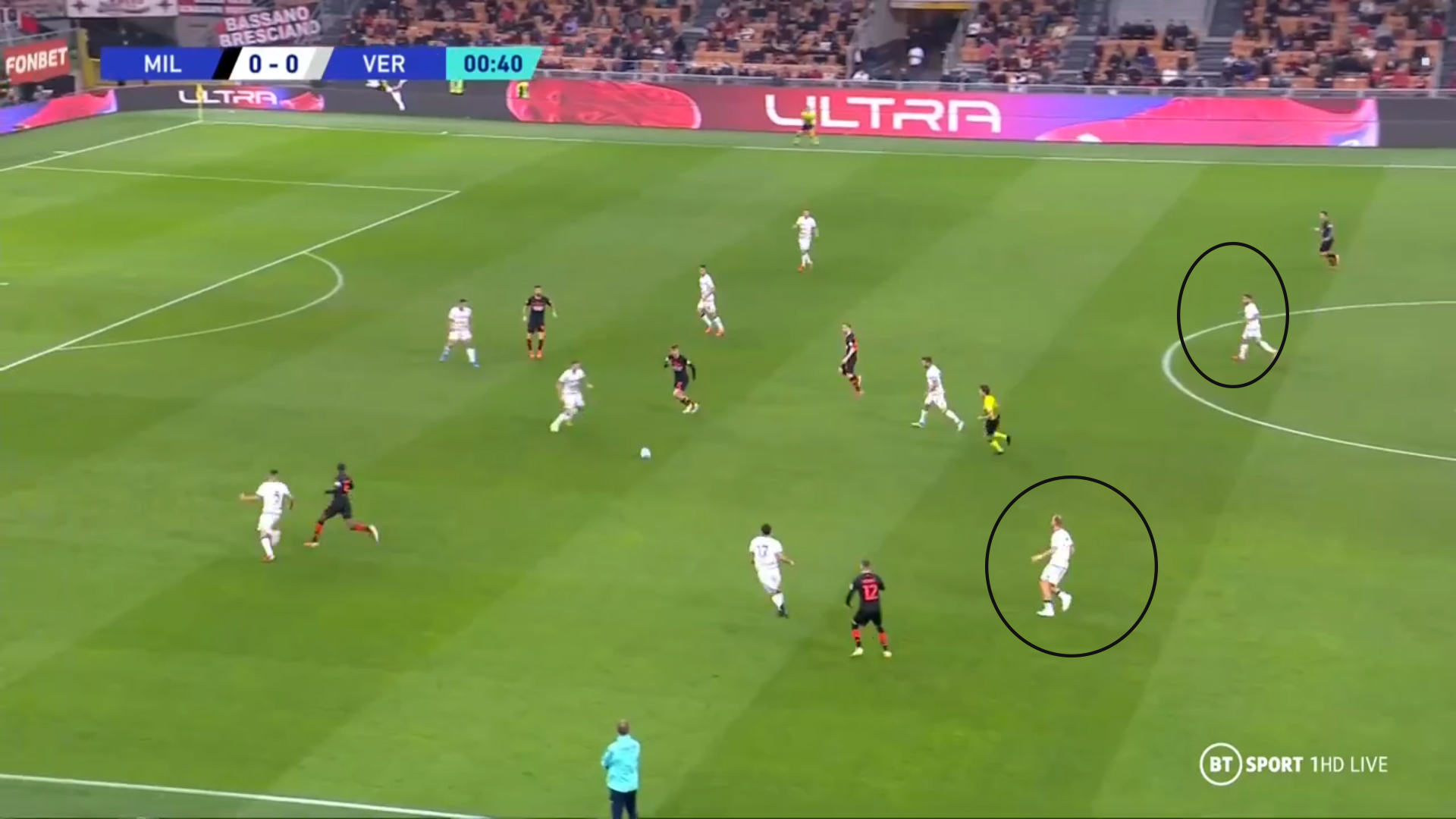 Milan without Diaz – who would play between the lines – deployed Maldini in the No.10 role but he was quite a different profile from what the Spaniard was was. This meant Pioli had to come up with different positional rotations to ensure Verona didn’t manage to isolate Maldini. 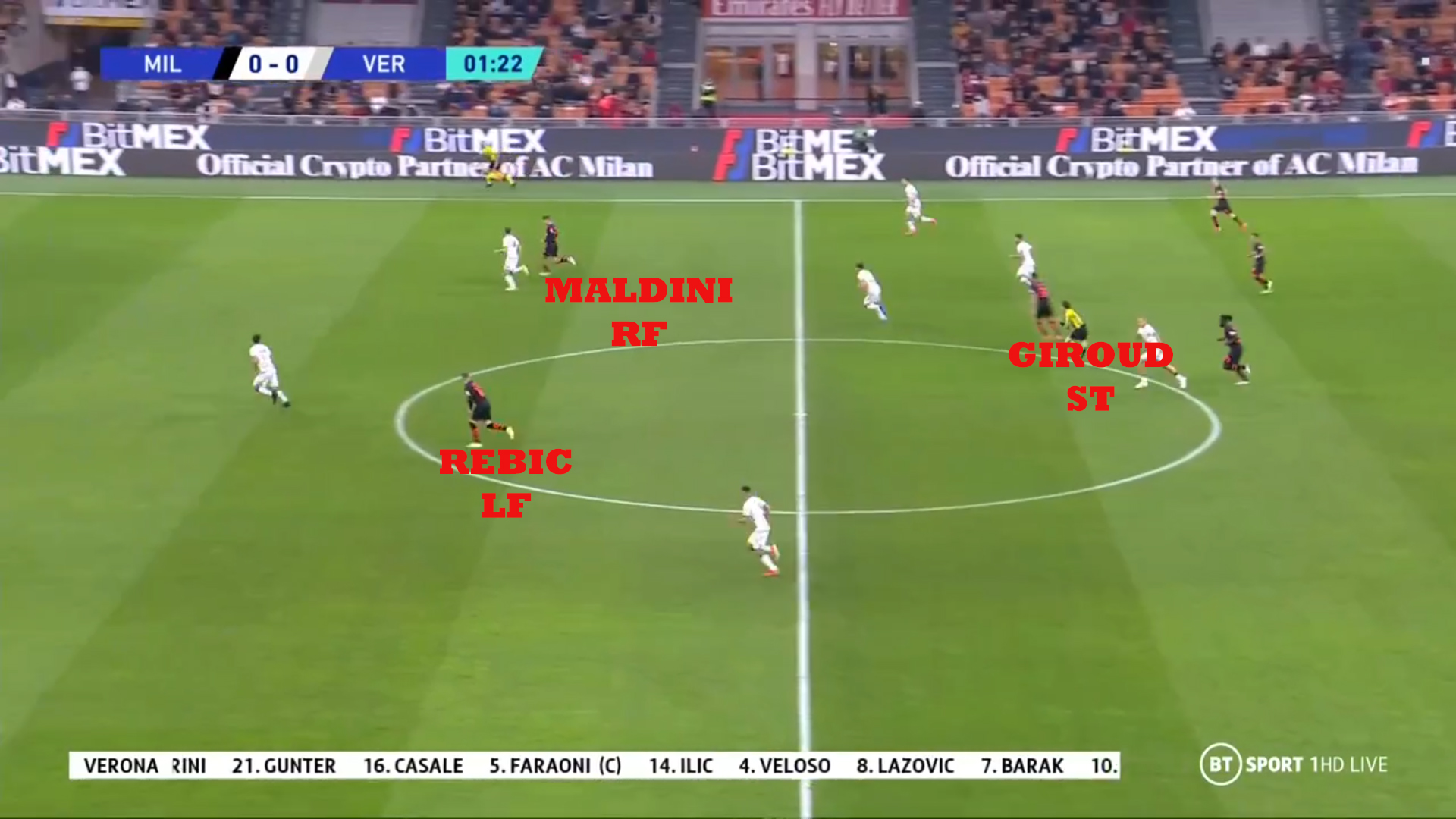 One such rotation was to play as a one-two in attack with Giroud coming to receive Tatarusanu’s long balls while Rebic would cut inside as a forward and Maldini would function as a right inside forward.

Another positional rotation was to have Saelemaekers cut inside and sit as a makeshift attacking midfielder while Maldini played far right while this gave Calabria way more space to go forward.

Verona pressed Milan high and man marked whenever they tried to play out of the back. This meant that Tatarusanu had to go long to use Giroud’s hold up play to create chances and catch Verona on the break.

However, up until the second half Pioli’s tactics did not come off as Maldini struggled and Verona’s narrow system gave Milan no space to manoeuvre.

Pioli brought in Krunic and Samu Castillejo as tactical changes. The Bosnian played as a No.10 in Pioli’s typical 4-2-3-1. The Spaniard meanwhile was used as a natural right winger to exploit Verona’s 3-4-2-1 and their lack of width to challenge Sukalo, the left centre-back, who came on for Ceccherini since he was cautioned.

You can see Castillejo positioned behind Verona’s wing-back Lazovic and close to Sukalo. Anytime the ball reached Castillejo in that position it pitted him on a 1v1 against an inexperienced opponent.

Pioli made another tactical change. When Milan were on the ball he had the centre-backs split and played closer to the flanks while the double pivot where playing very close to each other in the centre. This allowed Ballo-Toure and Calabria to push up higher while protecting the core. 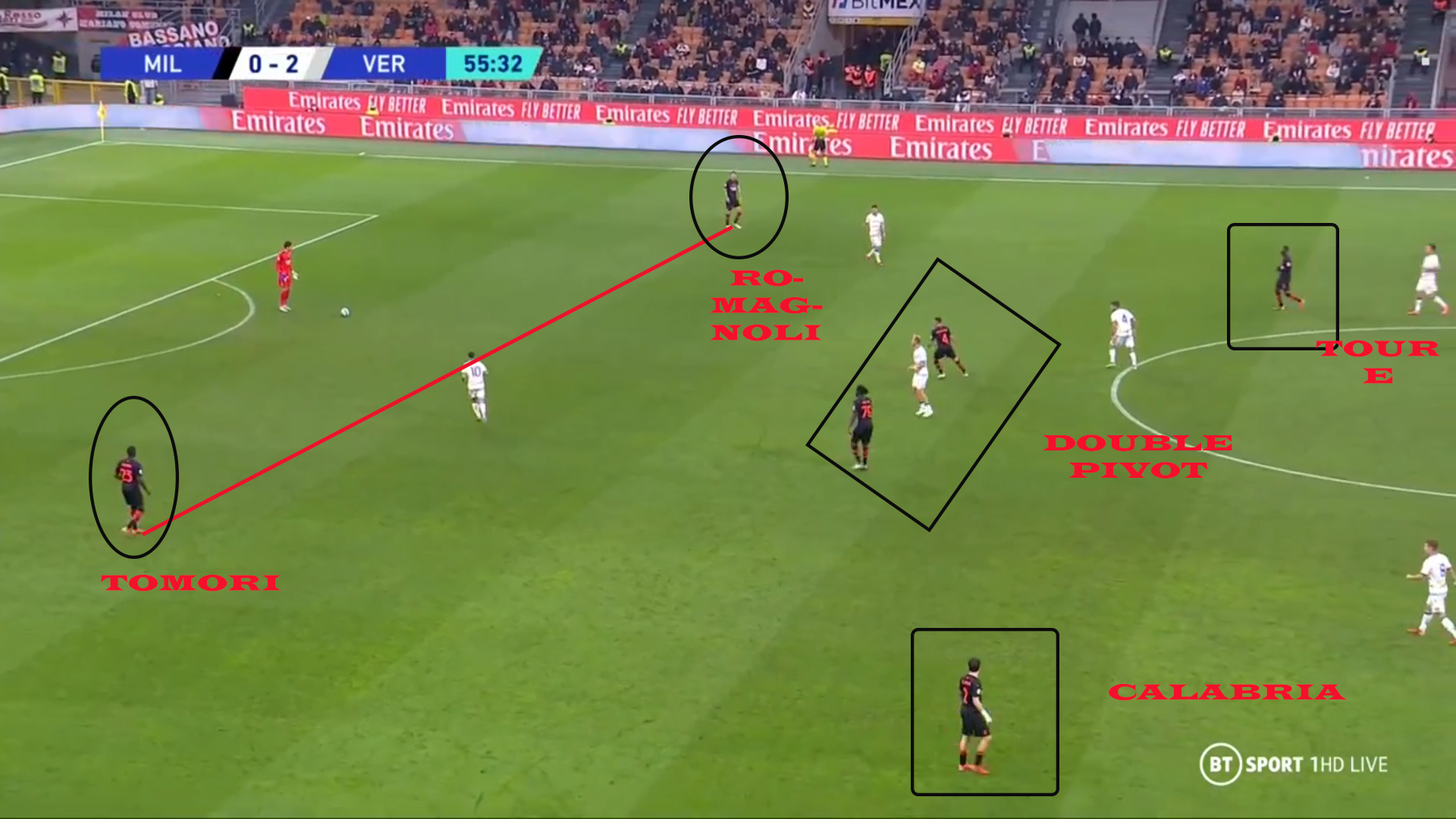 Milan being predominantly strong on the left had Krunic, Leao and Ballo-Toure to cause overloads and pull Casale out of position.

This worked perfectly in the lead up to the penalty for Milan. You can see Leao positioned in the left half space with Casale man-marking him while Castillejo is in space between the lines.

Leao drags Casale into the centre and this creates a gap between him, the right centre-back and Faraoni the right wing-back of Verona, something Castillejo notices. 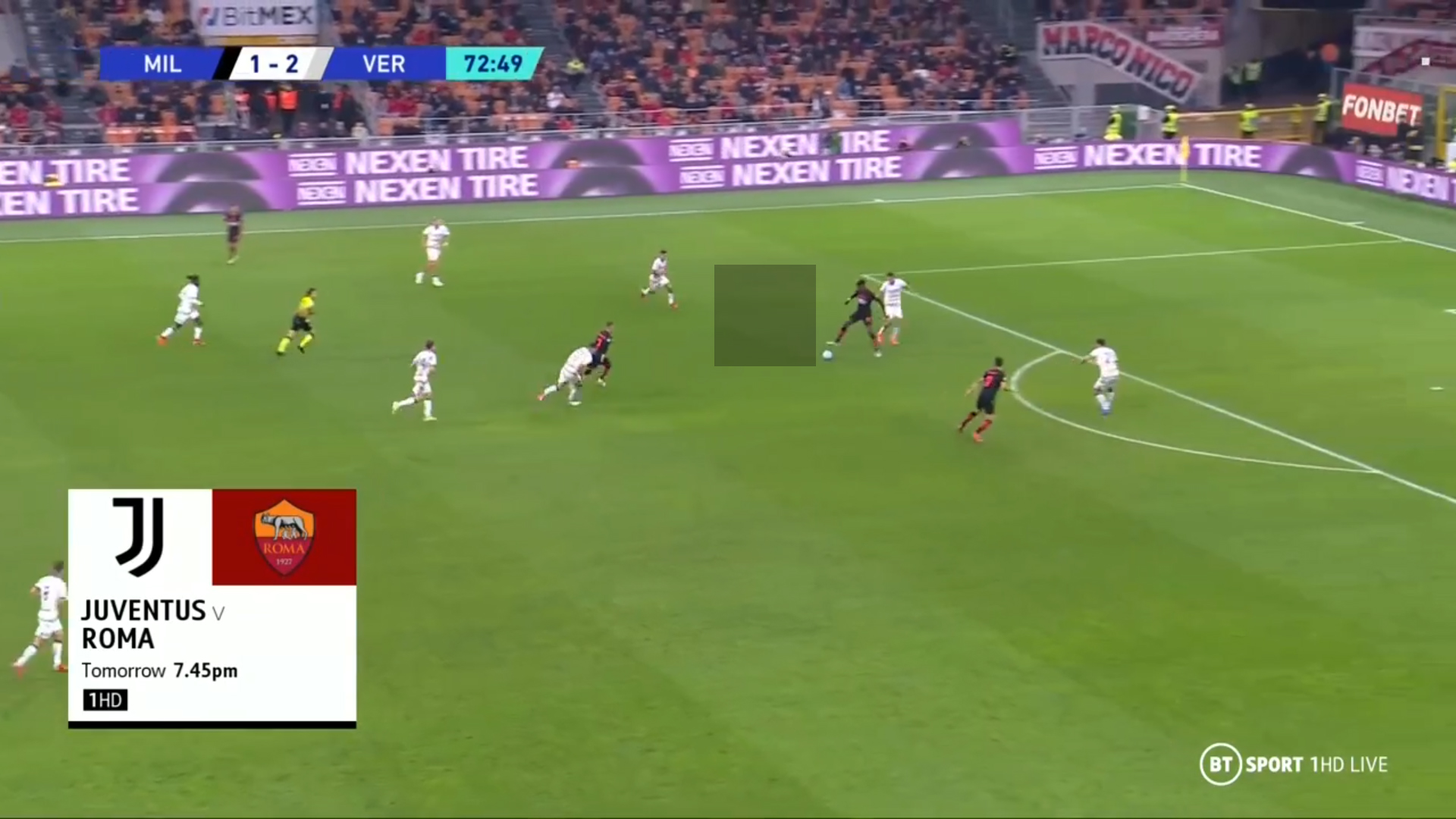 Faraoni realises this and tries to close the temporary gap but is too late and in his movement he fouls Castillejo and Milan get a penalty.

Timely changes from Pioli along with good performances from Milan in the second half helped mount a comeback. At the end of the season, it is these games that count for the standing in the table.