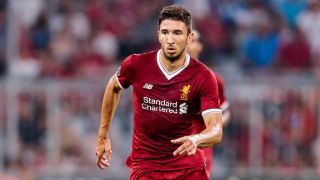 AC Milan are one of a number of clubs who are in the running to land Liverpool midfielder Marko Grujic, according to a report.

It is no secret that Milan are in the market for midfield depth this summer as head coach Stefano Pioli has asked for four holding midfielders of starter quality, with Tiemoue Bakayoko and Sandro Tonali strongly linked.

Tuttomercatoweb.com (via MilanNews) reported earlier in the week that Milan have initiated contact over the possible signing of Marko Grujic, who spent last season on loan at Hertha Berlin, amassing four goals and one assist in 29 Bundesliga appearances.

He does not appear to be part of Jurgen Klopp’s plans at Anfield, and the report added how Benevento has already put forward the offer of a paid loan with option to buy.

According to the Daily Mail, Milan and Benevento are not the only clubs interested in signing the 24-year-old, with Aston Villa and Crystal Palace keen as well as Eintracht Frankfurt and Borussia Moenchengladbach in the Bundesliga.

Atalanta are also mentioned as having an interest, while the report mentions that Hertha had a €20m option to buy on Grujic which they turned down, so it is possible Liverpool could ask for the same figure.