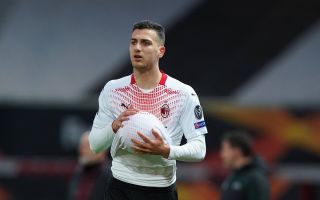 Several Milan players did well in tonight’s clash against Man Utd, which ended 1-1 after Simon Kjaer scored a late goal. Diogo Dalot was one of the players that performed well, doing so against his owners.

The Portuguese full-back, of course, is on loan at Milan from Man Utd and there’s no buy-out clause in the deal. However, if he continues to do well, then the Rossoneri will surely sit down and have a discussion with the Red Devils.

This evening, Dalot performed well and actually did better overall than against Hellas Verona, even though he didn’t get a goal this time out as well. In our ratings, he earned a solid 6.5/10 for his performance on the left flank.

In an interview with MilanTV, as cited by MilanNews, Dalot talked about what it was like to play against Man Utd. He also made it clear that Milan deserved the equaliser, although it came very late in the game.

Is there satisfaction with the performance and the result?

“I think the result is absolutely right. We played a great match and deserved the goal.”

On meeting up with Manchester…

“A special occasion, I can’t lie. I had great moments with Manchester but today I was only thinking about Milan. It’s important to have scored this away goal.”

“We know we have to do what we did today, even more. By doing so we can get closer to victory.”