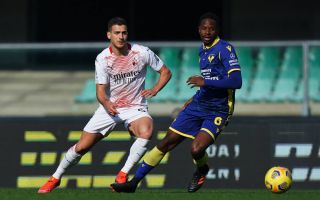 Defender Diogo Dalot has claimed that AC Milan have ’30 strong players’ in their squad, allowing them to cope with injuries.

The Rossoneri managed to battle an injury crisis to produce an excellent 2-0 win against Hellas Verona at the Stadio MarcAntonio Bentegodi earlier this afternoon, boosting the team’s top four hopes dramatically.

Dalot spoke to Sky Italia during the post-match, with his words transcribed by MilanNews and translated below.

On the performance of the team: “We are not a team of just 11-12 players but almost 30 strong players. We have shown that and I am very happy for the team.”

On his performance and on the goal he scored: “I’m very happy. My goal is to do better and better and I’m happy with my goal. I’m even happier with the team’s performance. We all did well today.”