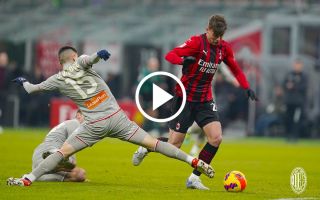 Some fans are calling for Stefano Pioli to reinvent the role of Daniel Maldini after a sensational sliding tackle that the youngster pulled off against Genoa last night.

The No.27 showed that he has certainly learned a thing about sliding challenges from his dad Paolo as he raced back and won possession with a beautiful intervention during the second half of last night’s 3-1 Coppa Italia extra-time win over the Grifone. As expected, people are now calling for him to play deeper.

Justin on Twitter simply replied: “CDM.” Anthony Manx said: “I think his future could be in the midfield. Very skilled in the defensive phase, and playing further back will give him more time on the ball.”

Hassan added: “I think he’s better suited deeper in the field, can be moulded into a solid midfielder.” Milan10000 remarked: “He did better in defensive phase. I really want to see him play in deep role.”