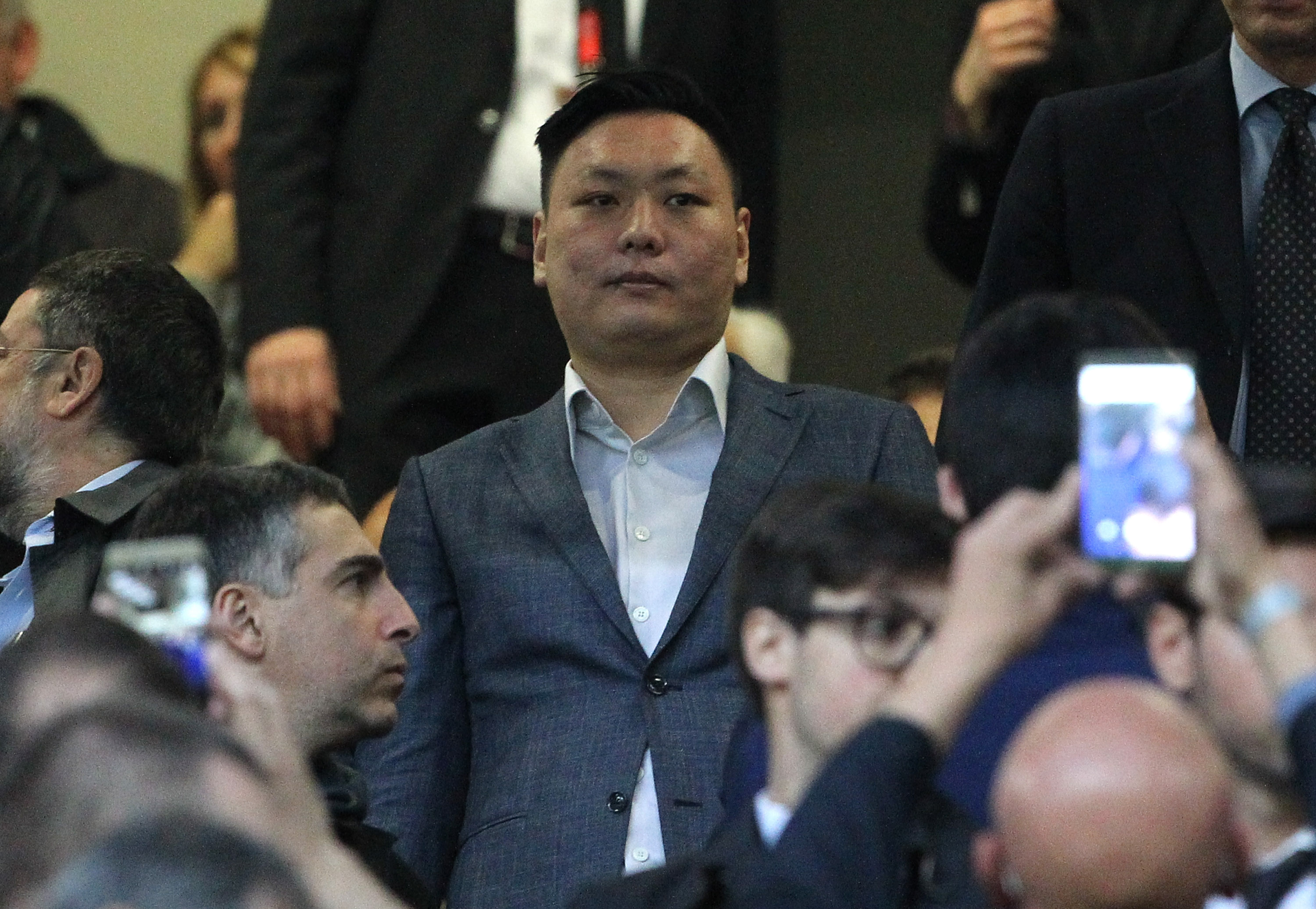 Former AC Milan director David Han Li has sought to set the record straight about the bizarre period of the Rossoneri’s Chinese ownership.

Yonghong Li bought the club from Silvio Berlusconi in April 2017 under the name Rossoneri Sport Investment Luxembourg, but he defaulted on the repayment of loans.

Han Li was the former executive director of Milan under Yonghong’s ownership, though ultimately it would be for just 12 months as Elliott Management seized control of the club in July 2018.

Since then, the Chinese investors have remained quiet about exactly what went wrong, but now David Han Li has lifted the lid on what happened, blaming a media witch hunt for destroying trust.

“After all, we’re only human,” he told Forbes.

“There are a few reasons why we have kept quiet. The first is that now, we don’t have any trust in anyone. It was also about not having trust in the media.

“Just a few hours after we signed the SpA, all the names of the investors were leaked. It was incredible, and damaged us a lot. There were even leaks from our board meetings, but we don’t know who these came from.

“Heavy attacks on us from the media always followed on from important events. Firstly in November 2017, right after we signed the exclusivity for debt refinancing, a damaging article published in the New York Times showed up.

“Secondly, on the exact morning when we started the process for debt refinancing in London, the Italian media started up with attacks once again. who had all this important information?

Recently, there have been rumours that Yonghong Li has set up a Twitter account in order to reconnect with the club’s fanbase and also attempt to set the record straight himself.

While there were some doubts about the authenticity of the account at first, but David has now confirmed that it does in fact belong to Yonghong.

“Yes, it’s very much Mr Li’s account,” he confirms. “He gets some help with the translation, but it really is him talking from the heart. He also thinks that his voice hasn’t really been heard when it comes to recent events at AC Milan.  But he was very hurt by some of the false and misleading things that were being said about him.

“Instinctively, he tends to avoid publicity, and that means he tends to avoid the media. But what he loves about Twitter is that he can talk directly with other fans, share his thoughts, listen to their views, without depending on the press who could re-interpret what he says.  And there are certainly a few false reports that Mr Li will be correcting.”

But just why exactly did the group decide to get involved with AC Milan in the first place? The answer, surprisingly, comes from the TV show Football Italia on Channel 4 in the 1990s – 5,000 miles away.

“They first started broadcasting Italian football matches in China in the late 80s and early 90s and I have loved AC Milan since then,” David continued.

“There are lots of people who were born in the 1950s, 60s, 70s and 80s who have really great memories and respect for Milan, they had a great image of a club who won and dominated the world of football at that time.

“For us, the history of Milan was so important, as were the many many good players from the past. There are probably even more legends at Milan than even Real Madrid and Barcelona.

“The most popular of them in China? Sheva, Kaka, Maldini, Gattuso, Pirlo, even Ronaldo and Zlatan, and of course Van Basten and Rijkard, Baresi – yes there are a lot.

“When I was a kid, my friends and I learned the Italian chants at Milan for lots of the players. Not only Milan, but Italy, the league, and the country, really it’s my top favourite. About 17 years ago, the first match I watched in a stadium in Italy was Milan. At the end of the day, there’s a connection there, it’s special to me.

“Taking over Milan was surreal. The next day we realised that this was a very heavy burden. I definitely understood, as a football fan, what we had achieved, but we were also the management. We had lots of duties and we had to take responsibility. It was so important to us that the club did better and better, so there was no time to rest on what we had done.

“We had responsibility for the club, and many millions of fans, which is not easy. We wanted to be loved and respected, everyone wants that. In some ways I had to adapt from being a fan to being as part of the club. We, as ownership, were not involved in daily management decisions, but we took management’s advice and discussed with them some important matters.

“At the end of the day, everyone has to take responsibility for their decisions, so I tried very hard to adapt. But unfortunately, with many things, as owners and as management, our hands were tied.

“The problems weren’t about the fans, but the high level people, the important people, the people who had the power that wanted to protect their own interests. Then, it’s different. They would try to do everything to get away from us, to keep us out of the loop.

“We did invite Mr. Berlusconi to be Honorary President. He accepted at the very beginning. But, a few days before the closing, he said that he could not accept our offer. He didn’t give us a reason, he didn’t say anything.

“There are many reasons why we offered it to him. The club had this beautiful history thanks to Mr. Berlusconi. This couldn’t be forgotten.

“Plus, there was his influence, his image and his connections, and this is something we wanted to respect by making this gesture. Especially as we were new to the country and we had hoped to have someone who could help us.

“At a football club, you are not managing a machine, you are managing thousands of humans. Your vision has to have everyone in alignment with you for it to work. We had to understand, as it came with cross cultures and philosophies, but unfortunately we didn’t have enough time to make it work.

“Of course, our intention was to get the club back on track, Milan had been quiet for a long time and we needed to change that. We were very surprised when we looked at the financial statement, that even with such a beautiful IP, there was almost zero revenue coming from China. So at the same time we felt very excited, as we realised we could really do something to bring revenue from China to the club.

“That would have been a very good start to put the club back on the right track, obviously there were lots of other elements to address, but that was our intention and the idea.

“It was such a pity, we had clear plans and ideas which were not the traditional football revenue. Because if we were not good enough at that moment to have competition with the other big clubs for traditional revenue, we needed to play smart.

“The ideas we had were very creative ideas, and are very different for the football world. It’s not only only merchandising, TV rights, stadium, there is more than that.

“I think that the people in charge of Milan didn’t really realise that although they are still a really important club, it has become less and less relevant outside of Italy, there is much less of a connection between fans abroad and the club because they are no longer regulars in the Champions League.”

He also spoke about the treatment that the group were given by the media, both in Italy and even abroad, aiming a dig at Elliott Management.

“Ah, the media. I think by the end they also behaved differently towards us. I asked, I think in February 2018, one of the Elliott guys directly whether they had been responsible for planting those media attacks, and if they wanted the club for themselves. Of course, he denied it.

“We had heard about Elliott’s reputation but you never know if the reports are real until you really know someone. The stories could have been put there by competitors, there are different reasons why these stories exist. I was not sure if the stories were true…until later!

“I prefer to take people at face value and give them a chance to prove themselves. If they had behaved perfectly, all we needed them to do was the debt refinancing. But, this didn’t happen how we expected, it wasn’t as smooth as we expected!”

Han Li also spoke about the intense stress that he and his family were under while owning the club due to the immense amount of capital investment required.

“We just wanted to respect the fans and the Italian culture. We could’ve had all Chinese directors on the board, but we didn’t, because of respect. We didn’t want the fans to think we stole from them, we didn’t want any bad feelings towards us. That’s why we appointed Italian directors. But  this was used by some people, and it was because of our kindness to be honest. It was used against us.

“I was under so much stress that I still have scars on my thumbs where I pushed my fingernails into them because of it. It was the same with Mr Li.”