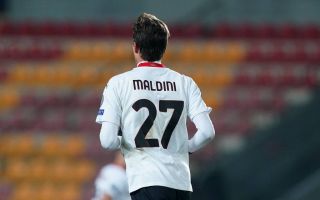 Devil’s Advocate: Any judgements on Daniel Maldini are rash and unfounded – he must be given time and support

The prominence of teenager superstars such as Joao Felix and previously the likes of Kylian Mbappe and Erling Haaland has given rise to this idea that players must be close to the finished article when they enter their 20s.

It is for that very reason that some sections of the Milan fan base appear to already be expressing serious doubts about whether Daniel Maldini has what it takes to play for the Rossoneri. This, of course, must be added to the weight of expectation that comes with wearing a red-and-black shirt that has such a famous surname on the back.

However, the very notion that we have seen anywhere near enough of Daniel Maldini to make any kind of informed or educated judgement is as bizarre as it is preposterous. There is almost an undercurrent of some fans who seemingly take pride in saying ‘told you so’ when he struggles in the brief cameos that he gets.

Let’s be honest, most people in life are still focusing on education at the age of 19. That’s not just education in a literal sense either, it’s the idea of learning and growing as a person by enduring life experiences that shape character. A lot of the Milan Primavera players, for example, are doing their studies and various other assignments as they battle away to achieve their dream of playing under the lights at San Siro. Well, Maldini Jr. has avoided the assignment that I don’t want to do because the only thing he should be studying is how to repay the faith paid in him in the management. Education in its usual form, therefore, has to come second so he can focus on his career. His father as well as sporting director Paolo Maldini refused loan offers last summer – they want the teenager to grow around quality players. Given the club’s start to the season, it would be fair to say he is doing just that.

Daniel Maldini has made eight appearances in the Rossoneri shirt so far, amassing just 215 minutes of action, but some already seem ready to judge. Imagine if we did the same to Ismael Bennacer, for example, or others who struggled on arrival before showing their true value and ability to adapt?

He has played 10 minutes in Serie A this season: seven against Spezia in the 2-0 win, then three against Sassuolo on Sunday. In the Europa League qualifiers he had 33 minutes against Bodo/Glimt with the team 3-1 up, and he bizarrely started as a centre-forward for 67 minutes of the dramatic Play-Off round penalty shootout win over Rio Ave.

His other two appearances came in the group stages: two minutes against Sparta Praha in a 3-0 win at San Siro, 78 minutes of the 1-0 win away, which is to date the best assessment we have on where he is at.

The point to that is very simple: it is far too soon for anyone to draw any definitive conclusions on Daniel Maldini. What we do know that in his 200 minutes (less than 2.5 games), he has shown good vision, good dribbling, tenacity and awareness, but he has also made some errors in his decision making, his weak physicality and a tendency to drift in and out of games.

In short, good and bad, but not enough to say whether he will make it or not. He also has only been put in a position to succeed in one – arguably two – of the aforementioned appearances. He should have had more game time in recent months when the team are comfortably ahead – there is literally no better time for young players to be used.

In addition, he has been played in a number of different positions too such as centre-forward, out wide, attacking midfielder and even a weird sort of box-to-box role against Sparta in the Czech capital.

While it is obvious that the coaching staff and the management must devise a clear plan with regards to his future – such as where to play him and the best moments for him to enter games – there is no doubt that the young forward will just be enjoying getting minutes however they come and no matter how difficult the game situation.

Rafael Leao said it well in his interview earlier today: “Who will surprise us in 2021? Honestly I say Daniel Maldini because he is so talented. I hope that next year he will have more chances to show off, because I love him as a friend and as a footballer he has so much talent.”