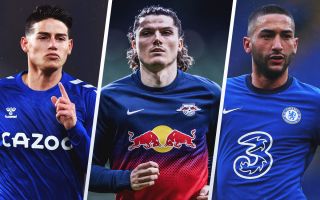 The 2021 summer transfer window officially opened yesterday, and many deem it to be one of the most important for Milan in many a year.

The Rossoneri managed to not only secure a return to the Champions League after a seven-year absence, but they also secured a second-placed finish with the 2-0 victory against Atalanta in the final round of the season, the club’s highest since the 2011-12 campaign.

After mounting a Scudetto challenge for most of the season despite numerous injury problems and the subsequent selection crises, the general consensus is that Paolo Maldini and Ricky Massara certainly do not need to overhaul the squad, but rather add complimentary pieces and bolster depth where possible.

However, certain situations have arisen that force them to act decisively. Now the dust has settled after Hakan Calhanoglu’s decision to cross the Navigli and join rivals Internazionale, attention must turn to how Stefano Pioli will have to work with in the attacking department next season.

In addition to adding two new full-backs, a central midfielder and securing the returns of useful players like Sandro Tonali and Brahim Diaz, there is no doubting that securing a quality number 10 is of paramount importance. What is interesting though is that nothing absolutely concrete has come out about who could be targeted to replace the Turk.

Several reliable sources have reported that Milan are in no rush to sign a new attacking midfielder despite the fact that preseason begins on July 8, but instead the management are likely to monitor the situation of the big clubs and their potential cast-offs, with players like Hakim Ziyech of Chelsea, Rafinha of PSG and James Rodriguez of Everton all mentioned.

Perhaps the most striking thing about the players linked is that none of them seem to be an obvious fit. The strongest rumours have been regarding a potential €10m swoop for James Rodriguez, but that in itself is a head scratcher. The Colombian has name value and unquestionable ability, but a questionable injury record that comes with a high salary and doubts about whether he can play the 10 role in the way that Pioli wants with regards to defensive coverage.

Ziyech seems to be one that has most united the fanbase in terms of him being a good potential option for the role, but he is coming off the back of a confidence-denting season with Chelsea and given they paid over €40m to sign him from Ajax, there has to be a doubt about the big investment that would be needed to bring him to Italy, unless a loan with option were possible.

There is an almost unanimous agreement that Rafinha of PSG would not bring the quality needed to make a real impact, especially after he struggled to do so at Inter, while the links with other profiles such as Papu Gomez and Josip Ilicic throw up question marks about Elliott Management’s philosophy given their age.

One profile stands out above the rest at the moment: Marcel Sabitzer of RB Leipzig. There is no doubting the quality that the Austria captain possesses as he has been one of the best creative players in the Bundesliga for some time now, having amassed 52 goals and 42 assists from 227 appearances for Leipzig.

Not only that, but he is used to a pressing system and knows how to contribute in both phases of play, which is something that made Calhanoglu a sort of ‘comfort blanket’ for Pioli. Given that his contract expires in 2022, and that he has a low salary, there are definitely implications that it could be a cut-price deal too.

There is a very strong possibility however that the name Maldini and Massara really want ahead of next season has not made it to the newspaper headlines just yet, such is the fluid nature of the mercato. It must also be said that taking time over the decision is a right they have earned based on previous business (look at the Tomori deal, for example) and throwing caution to the wind could prove to be incredibly beneficial.

Why? Well the reasons are two-fold. The first is that this summer – more so than any that have preceded – promises to be one of opportunity, where certain chances to secure quality players through advantageous formulas arise out of nowhere. A lot of big clubs need to sell or at least lighten their wage bill, and Milan can benefit from that.

The second reason is that this is a signing that Maldini simply cannot afford to get wrong. The beating heart of Pioli’s 4-2-3-1 system and the way that the team play – that is pressing hard to win the ball back high up the pitch and countering quickly – revolves around the double pivot and having a number 10 who can pull the strings.

Two months is a long time when it comes to the transfer window, as Milanisti know better than anyone. Yes, in an ideal world the entire squad would be in place for the start of preseason in six days, but that isn’t how things work. Not all of the pieces in a jigsaw are inserted simultaneously, but the most satisfaction always comes from that final piece.