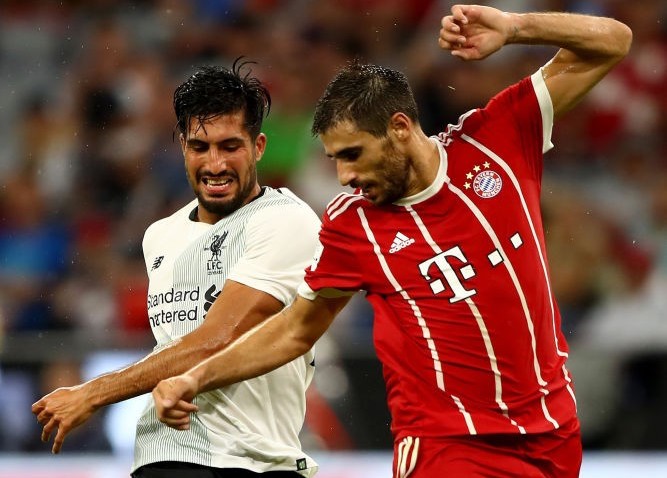 If the latest reports are to be believed, Stefano Pioli is considering making quite a major tactical change to his AC Milan side in January.

According to the reliable Sky Italia, the Rossoneri are thinking about the idea of signing a new midfielder to play in front of the defence.

This would not mean that Bennacer loses his place necessarily; he could move into the mezzala position where he would be given more positional freedom.

The Algeria international arrived in the summer from Empoli and has been one of the bright spots so far this season after taking the place of Lucas Biglia in front of the back four.

However, it appears that discipline may be an issue for the 21-year-old, who has racked up seven yellow cards in nine starts and has already been suspended for a game.

Here, we take a look at five potentially attainable targets for Milan…

The 31-year-old Bayern Munich man has played 15 times in all competitions so far this season, but he has already been linked with a move to the Rossoneri.

However, as of 11 October he had amassed less than 150 minutes of competitive action for the Bavarian side, causing Calciomercato.it to speculate that Milan could snap him up in a bargain €20m deal.

Martinez – who has been at Bayern for six-and-a-half years – would provide the perfect mix of composure and leadership in a position so vital, as well as elite-level experience to help a young group along.

His deal expires in 2021 too, meaning the Bundesliga champions may look to raise a little bit of cash from his sale, but in a potentially favourable deal.

Lucas Torreira is a name that Milan fans will recognise, as he has been heavily linked with a move to the Diavolo since the summer.

A market opportunity may present itself in January though, as TMW (via MilanNews.it) reported last month that Torreira is ‘not happy’ with his season at Arsenal thus far.

In addition to that, his agent Pablo Bentancur refused to rule out a return to Serie A, with a price tag of around €30m seemingly set.

The Uruguayan is a player who seems to have his heart set on playing in Serie A again, and his experience of the league from his time at Sampdoria – coupled with the fact he is only 23 and therefore compatible with the club’s transfer plans – could make him a very attractive prospect indeed.

The Italy international is seemingly attracting the interest of all Europe’s elite clubs having adapted well since achieving promotion to the top flight with Brescia.

The Rossoneri are believed to be one of the clubs in the running, as Calciomercato.com reported in September that the Rossoneri had a €15-20m summer bid for Tonali rejected.

Juventus, Inter, Napoli and Fiorentina have all been credited with interest in Serie A though, as have Manchester United and Borussia Dortmund outside of Italy, with a high price likely to be set.

However, Tonali has never been shy in revealing his love for Milan, something which just might work in the club’s advantage should they choose to launch an assault next month.

The former Liverpool man is struggling for playing time under Maurizio Sarri at Juventus, playing just seven times in Serie A and not a single minute in the Champions League.

Leggo reported at the end of November that Milan have taken an interest in Can, while English outlet The Sun have suggested that both Manchester United and Borussia Dortmund are also chasing him.

Can signed a four-year deal with the Bianconeri following the expiration of his contract with Liverpool two years ago, but should he seek pastures new in January Milan could do a lot worse than signing a player built to play holding midfield.

At 25 years of age he has already racked up over 250 games across spells with Leverkusen, Liverpool and Juventus so would offer vital experience but also high potential upside.

Yet another player who has found himself down the pecking order this season, Paredes has played just 138 minutes across four Ligue 1 appearances under PSG boss Thomas Tuchel.

Calciomercato.com recently made the bold claim that Paredes would immediately return to Italy – having previously played for Roma – if the opportunity arose.

His representatives are even apparently already at work trying to secure a destination, with Milan among the teams interested in signing the man PSG paid €40m for last year.

The report even claimed that the Ligue 1 giants would accept a deal with the formula of a loan with obligation to buy, and given the Argentine’s age (25) and quality, he should be firmly on in the notebook of Maldini and Boban.

Reports continue to link Ivan Rakitic with a move to Milan, however even if he did join one would hope that he is deployed as a box-to-box midfield given his creative ability – hence why he has been left off this list.

There were a few mentions for Tiemoue Bakayoko when the question was asked on Twitter, and while it cannot be ruled out it does feel like that ship has sailed somewhat given his importance to Monaco.

Who would you like to see Milan sign at regista? Tell us below in the comments section