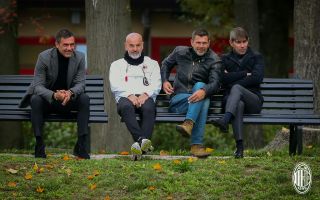 Devil’s Advocate: Gazidis and Elliott have made the boldest of calls – what happens now at Milan?

To describe the last 24 hours as a category five hurricane might even be a bit of an understatement in truth, with everything seemingly having done a full 180 degree spin.

It hadn’t been the most stable last few months to begin with, given the persistent speculation regarding Ralf Rangnick’s imminent arrival as head coach, then emerging doubts, then assurances in what has been seemingly a vicious cycle since early this year.

Once the dust settles, it is important to remember that we finally have one thing: clarity. Whether you agree with the decision or not, the club’s ownership have now made their choice to entrust a project and a process led by Stefano Pioli and Paolo Maldini which has produced largely fantastic results this calendar year.

The possible arrival of Rangnick generated a lot of furore in the media and from supporters who wanted the club to roll the dice and take a completely different route, but that isn’t happening.

As supporters of this football club we have a very important job now. The bottom line is that nobody saw this coming. The idea that there are a tier of ultra-reliable, always on the ball sources had diminished under Elliott Management, but now it seems to have been completely eradicated.

For starters, it took German outlets Bild and Kicker to report the news that Pioli would be staying due to Milan’s U-turn, and that was a whole twenty-four hours after the current Rossoneri boss had in fact signed a new two-year deal. Nobody picked up on it on Monday evening, not one source.

Probably not even Pioli nor Rangnick saw this remarkable twist coming. If you’re happy as a fan with the outcome, great, but be respectful. If you wanted Rangnick, that’s fine too, but give this current group the support they deserve. Let’s have some class.

We have a team that we can be really proud of, one that are making Milan fun to watch again. Let’s support that and see what the coming months bring. There is no use wasting time in point-scoring against other fans who want the same thing: the best for our club.

Social media at the moment is a place which seems to be two warring factions: those ridiculing others who actually did a lot of hard work and research on Rangnick, because we were all told that it’s definitely happening, and those who are blasting the club for changing their mind on a man they deemed the messiah.

We know what the future holds now. The past is the past, and the present and future are both exciting. The most important thing is the badge and the club AC Milan. We should all stop the toxicity and get ready for Friday.

Milan have won seven games out of nine since lockdown and are well on course to end the season in the top four when you look at points accrued in the calendar year of 2020. The team have a new mentality, a new identity, something that should be celebrated and not chastised.

📅 #ACMilan are a different beast since the turn of the year…

With Gennaro Gattuso there were plenty of regrets, both for not listening to his advice regarding recruitment and not making a bigger effort to convince him to stay, continue his work and establish some continuity.

Now, we can no longer have that criticism. The management have chosen to back what is working here and now. They have put faith in a group that despite all the intense media speculation have worked with professionalism to bring the best results for this football club.

What happens when the world is turned upside down nobody knows yet. Transfer targets are likely to change as are strategies such as the potential renewal of Zlatan Ibrahimovic.

One thing Maldini has always been adamant about – assuming he stays on as technical director of course – is that the club need a blend of exciting youth and experienced leaders to get back towards the promised land, so from that one could deduce that the idea of only signing players under 24 should be thrown out of the window.

Things are going well now, and as fans we should let the men work. As with anything in football, support it until it gives you a reason not to.

The door may be closed on Rangnick but this might open up a number of other even more exciting doors. Who knows what Maldini might have in mind if he were handed a €100m budget?

All will become much clearer in the coming weeks as we begin to get our heads around exactly what the plan is regarding the future of our football club, but for now the main decision has been made, and we have a duty to stand behind those who stood up for Milan in the face of adversity.