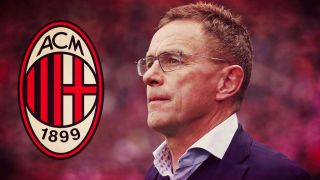 Devil’s Advocate: How Milan’s starting XI would look under Rangnick now – Gabbia and Leao in

Unless you have been living under a rock since Christmas, you will have seen the intense speculation regarding Ralf Rangnick’s proposed arrival at Milan.

The German is set to leave his role as Red Bull’s Head of Football Development (or already has, depending on which media outlets you believe) to take up a role as the Rossoneri’s new head coach and head of recruitment – an unprecedented role in Italy.

With it, he is expected to bring his intense, Gegenpressing-based style of football over the Alps and into Serie A. There have been countless links to young, talented players that fit his philosophy as a result, but how would Milan line up if he were in charge now?

For this, we’ve assumed Rangnick would use his preferred 4-4-2 formation with the wide midfielders tucking in to form a 4-2-2-2 of sorts – and we’ve had a go at naming the starting XI…

Not much explanation needed here. One of the best young goalkeepers in world football and keeps his place easily.

Right-back has been a problem area for Milan all season, but Conti gets the nod due to the fact he functions more like the type of full-back Rangnick likes to use. More physically imposing and attack-minded, he just about gets the nod, but for next season expect a new name in this spot – possibly Denzel Dumfries.

Taking injuries out of the equation, this spot is essentially a battle between Gabbia, Matteo Musacchio, Simon Kjaer and Leo Duarte. Rangnick tends to prefer young players who recover quicker between games, and Gabbia showed plenty of promise prior to the break for COVID-19.

In addition, he appears to have bulked out during the break, meaning he is primed for the aggressive and intense approach that the German uses right from the back four.

A composed captain and a fantastic ball-playing centre-back with exceptional judgement and anticipation for the most part, Romagnoli keeps his place easily. Rangnick could actually bring that definitive step up in quality the 25-year-old has threatened for some time, as it appears Romagnoli is so well-suited to his style of play.

Theo will have to get better defensively due to the nature of this system, but in every other area he is basically the perfect left-back as he offers marauding runs and the ability to cause havoc in the opposition’s final third. The Frenchman will be a real asset.

Like the right-back position we expect to see another name in here for the 2020-21 campaign given how hard Milan are apparently pushing for Florentino Luis, but Kessie could do a decent job of forming an effective midfield pivot between now and then.

Physicality is the Ivorian’s main asset and he could certainly contribute to the press, but decision making has never been his strong point and that is very important in the eight-second rule.

Another player who – like Romagnoli and Theo – appears perfectly suited to form the spine of Rangnick’s team. He is tenacious and aggressive, almost like a little pitbull on the pitch, and while his disciplinary record does need improvement it should be expected that the Algeria international keeps his spot for the foreseeable future.

To assume Castillejo will have a spot in the starting XI for years to come would be naive. We have seen improvements from him since Christmas, but attacking production in the form of goals and assists is needed from the front four and the Spaniard rarely contributes either.

However, his overall play and his work ethic will get him in the line-up, though if he does not impress then Lucas Paqueta will be waiting in the wings – and Rangnick may not hesitate to trust the young Brazilian if he remains beyond the summer.

Calhanoglu is a divisive player among Milan fans due to the inconsistent nature of his performances, but it appears he has a huge admirer in Rangnick who will likely lean on his even into next season.

In theory this could be the perfect role for the Turk to finally shine, being able to drift centrally and find pockets of space to hurt the opposition while being able to demonstrate his workrate and technical ability. Rangnick is unforgiving though, so his faith would have to be repaid.

It is seemingly no secret that the Rossoneri are firmly in the market for a centre-forward, but moving Rebic closer to goal seems like a wise move. He has hit a real purple patch since the turn of the year, netting seven times in all competitions to become Milan’s outright top scorer for the season.

In addition to this he works incredibly hard and will be vital in pressing the opposing side’s back line right into the corners, and if he can continue the knack of finding himself in the right place at the right time he could be deadly in the counter-attacking style Rangnick uses.

Discarding Zlatan Ibrahimovic’s injury, it is likely that Leao would get the nod anyway because – as mentioned – Rangnick’s philosophy is all about intensity and choking to opponent into surrendering possession.

For that mobility and pace is key, and the Portuguese starlet obviously has more of that than the Swede plus the ability to run with the ball much better and recover faster between games. The arrival of the former Schalke and Hoffenheim boss could actually be the launching pad that Leao needs after his initial struggles.

🗣 Think we got any wrong? Tell us your thoughts below 🔴⚫👇