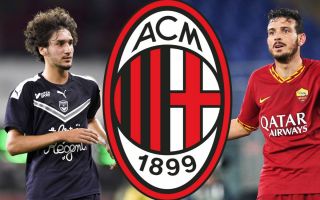 AC Milan’s market has experienced somewhat of a lull over the past few weeks after a flurry of early activity which saw a number of key issues addressed.

While the general opinion among the fanbase is that the signings of Mike Maignan, Fikayo Tomori, Sandro Tonali, Brahim Diaz and Olivier Giroud will all serve very obvious purposes throughout the course of what will be a testing season, there are still doubts about whether the team is objectively improved from last season.

Nonetheless, news from various reliable sources continues to filter through suggesting that Milan are closing in on their next two signings of the summer: Bordeaux midfielder Yacine Adli and Roma defender Alessandro Florenzi. In many ways, these two parallel pursuits are a perfect symbol for the divergence of Elliott Management’s project, one being captained of course by Paolo Maldini, Ricky Massara and the rest of the management.

Why exactly is that? Well for starters they are two very different profiles in terms of the spectrum of their careers. The Franco-Algerian is regarded as a very bright young talent at the age of 21 who has plenty of potential to grow into one of the best on his role.

The Italian on the other hand has virtually seen it all. He has played in three major leagues, has multiple Champions League appearances and has just won the European Championships with Italy.

Looking at each deal individually, it is clear to see the thinking. The management – along with Stefano Pioli of course – seem to have settled on trying to recruit a more technical ‘director’; a deputy to Ismael Bennacer able of being the metronome of the midfield, winning the ball back and driving play forward.

Adli’s strengths are his passing, vision and his work rate both in the possession and non-possession phases, the latter of which is a symptom of his age and youthful exuberance one could argue. Most importantly though, he fits the Elliott vision: a young and hungry player with upper levels to reach available in a low-cost deal of around €10m.

On the other hand, Florenzi is a sprinkling of experience that also corresponds to the project that the management are trying to carry out. Ismael Bennacer, Theo Hernandez, Rafael Leao, Sandro Tonali, Fikayo Tomori et al. have injected youth into the core, while Zlatan Ibrahimovic, Simon Kjaer and most recently Olivier Giroud have arrived to offset this by providing a mentoring ability of sorts and a champion mentality.

This appears to be the ‘phase two’ in the plans of the American hedge fund: clean up the wage bill, get rid of dead wood and rebuild the squad bit by bit with targeted investments, creating an exciting mix of young and old.

However, there are also some similarities between the two players which also makes them Milan’s kind of profile. For starters, both are versatile players given that Adli can play as an attacking midfielder, a box-to-box mezzala type or even in a double pivot alongside a more physical presence. Florenzi meanwhile can play anywhere along the right flank and has actually played in seven positions during his career.

Not only that, but as alluded to earlier they would both be low-cost investments with the Bordeaux man reportedly available around the €10-12m region – a fee that could be a snip for a player who is only 21 – while Roma are expected to part with Florenzi on loan with a buy-out of €6m.

With over 45 games to come in the upcoming season and without lots of opportunity to rotate like the Europa League groups provided last season, Milan need to have competitive and quality depth in every area because it is quite simply inevitable that it will be tested as last season’s injury crisis proved.

Adli and Florenzi may not be glamorous names that will sell thousands and thousands of shirts, but they are profiles that we should not be surprised to see Milan pursuing. If the end goal is to become financially virtuous while also becoming increasingly competitive, then this ticks the boxes.