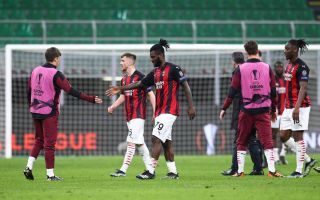 Losing is hard to take as a football fan, especially when the stakes are at their highest. Some defeats evoke more positivity than others, while some fan bases react differently based on circumstance.

Based on social media, it would be fair to say that the general consensus about Milan’s Europa League last 16 exit against Manchester United was the proverbial ‘close but no cigar’; that is to say the team played well but could not finish the job.

Now, there are some very important factors that certainly did not help the team heading into the two legs and in particular the second leg. The injury bug has been rife for a while now and has made it difficult for head coach Stefano Pioli to field a consistent line-up from one game to the next, and that makes it hard to plan and execute against the top opponents.

Without sounding too morbid, that is the story of Milan’s 2021 so far. What was a season so full of promise and the potential for silverware via the Scudetto, Europa League and/or Coppa Italia has slipped into something different, due to uninspiring campaigns in the latter two and a real fight on our hands to seal a top four spot. Selection problems have slowly eroded at the momentum and sapped the enthusiasm.

That context makes it quite hard to have the following view, but at the same time football is all about lessons, and a very harsh one was dished out last night. The game was virtually a carbon copy of the first leg, as United were awful for 80 mins or so in each game and Milan could not put them away.

In the first half of each leg there was excellent game management from Milan but they did not show even an ounce of composure in the opposition third and against a team of such quality, that is going to hurt. What is incredibly frustrating is that the Premier League side struck so soon after the interval again in the return leg just as they had the first, implying there were no lessons learned on that front and it left Milan chasing the game with a depleted attack and tired legs.

The reaction on social media was very much along the lines of how the team ‘battled so hard’ against ‘a better team’, that they should hold their heads high, with mentions of differences in club revenue and the fact United are the tournament favourites.

While that is all true and relevant to varying degrees, United were there for the taking and the bottom line is that the team did not seize their opportunity. If Milan want to go anywhere and be taken seriously, they cannot play the underdog card constantly. The team has to win big games, and the theme so far this year is that they have fallen at each major hurdle.

Defeats to Juventus, Atalanta, Inter and Napoli are bad enough – with a damaging defeat to Spezia also thrown in for good measure – but the United tie was the latest example that this team have not yet taken that next step in terms of mentality.

What is that next step? It’s to win the big games consistently. There’s even a step before that, and that’s to make sure that if you can’t win against those teams around you, you make sure that you don’t lose the ‘six pointer’ games. Milan’s record this year shows they are not there yet.

Milan dominated their opponents from England for 75% of the tie. Is that a positive? Perhaps, but it also makes it even worse that they didn’t go through. Injuries or not (and Solskjaer had some to battle too), Milan had the chances to kill them and didn’t.

This comes back to the point that nobody remembers the “oh but we could have won” – they remember the wins, the winners, the trophies. This is a club steeped rich in history because of the silverware that adorns the club’s headquarters, the lack of spare space on the honours board, and not because of the ‘almost but not quite’ defeats.

Milan are currently in the midst of a project which by all means is a very exciting one. There are some talented young players to build around for the future without a doubt, and the hope has to remain that a top four spot is secured and that squad can be built on again in order to move on to the next step, which is a return to the Champions League.

To expect too much too soon would be wrong, and this isn’t meant to come across as a message that Milan should dominate Manchester United and beat them comfortably – they are still a great team that has had a lot of investment. Not many sides can bring a €100m midfielder off the bench to win the game.

However, it does serve as further proof – given the nature of the performances, the lack of goals and the recent stretch of form – that this team has not yet taken that decisive step. A work in progress, with the labour hopefully soon to bear more fruit.