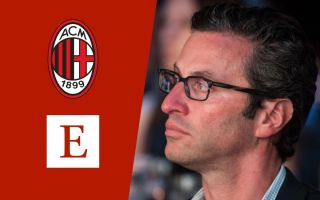 Every now and again, certain situations arise whereby the ownership and management of a football club are called upon to demonstrate their true ambitions and intentions, with no room for hedging any bets.

This is where Milan are at now with Elliott Management. That’s not to say there haven’t been times when the American fund were called into question before – with particular scrutiny placed on their decision to lean heavily on loan with option to buy deals – but the project has moved from an early phase into a crucial intermediary one.

There are certain issues that directors Paolo Maldini and Ricky Massara will have to tackle in the next few months and from those will come a crucial indication of the extent to which Elliott are willing to back them, support head coach Stefano Pioli and continue the path towards the end goal which is silverware.

The first of those is coming up in January and that is the pursuit of a new centre-back, given Simon Kjaer will miss the rest of the season after undergoing knee surgery. The signs will come from various things within this such as the formula that Elliott sanction (will it be another loan with option or a cheap deal), the amount that is spent and the name that arrived.

If the Singers were to give the green light to spending €20-25m up front on a centre-back with immense potential such as Sven Botman – a player who could become an anchor for years to come and has an international profile – it would demonstrate to supporters that even though Elliott are cost controlling they know a wise deal when they see it.

If, on the other hand, a player were to come in who is not as recognised a name and costs substantially less or is available through an opportunity because he is out of favour at his parent club, it would show that the solution sought is a stop gap without wanting to reinvest too much money from the Champions League revenues and continue the virtuous cycle.

It could also have a knock-on impact though because the next big signing that Milan make is arguably not for the centre-back role but for that of centre-forward. Zlatan Ibrahimovic’s future is the elephant in the room nobody wants to address; the Rossoneri cannot rely on him for much longer yet he continues to carry the attack.

Olivier Giroud at 35 is clearly not fit enough to take on the mantle of being the new starter and the Pietro Pellegri signing has been a disaster, so the next major expense Milan make should be the striker for the future. Names like Darwin Nunez and Dusan Vlahovic continue to do the rounds, but the timing of the new striker signing will in itself be interesting.

For example, if Pellegri’s loan were terminated early and a centre-forward was bought in January it would likely be a cheaper option, so again that hints at someone to fill a back-up role and delaying the expense of going out and getting that future No.9 even further.

Another question is in the name value: will it be an established striker that the fans will genuinely get excited about and will sell tickets and shirts, or will the potential Ibra replacement be another gamble that may backfire?

There is a serious consideration that needs to be made here, and it may sound silly on the face of things, but it is highly possible that Milan have grown on the field at a rate faster than Elliott imagined, and it may be too quick for their own good.

What does that mean? Well, the plan for Elliott – as communicated several times – was and is to establish Milan as a top four club again and therefore secure repeated appearances in the Champions League to boost revenues and improve the accounts, always under the watchful eye of UEFA and the Financial Fair Play Settlement Agreement signed by Gazidis.

Maldini said it himself: “To date, Milan cannot afford to have a top player from a financial point of view. When we have been in the Champions League for four or five years in a row then we will be able to make other financial sacrifices.”

How does this relate to now? Milan jumped from 6th in 2019-20 to 2nd last season having been in a Scudetto battle for over three quarters of the campaign. The target shifted in the minds of the fans, but probably not in the minds of the directors and the owners.

Now that the team are again battling for the title and there is the disappointment of having been knocked out as bottom of the Champions League group, some supporters and pundits are demanding investment to prove that this ownership are serious about Milan winning trophies again, when in actual fact that probably isn’t an absolute demand for the current state of play.

With that said a dose of patience is needed with the accountability. The squad isn’t perfect and it has some obvious gaps, and there are obvious issues that need tackling in the market, yet the trend is still upwards for the time being and there is plenty to like about this young core.

Making investments that put the financial future of the club at risk got Milan in trouble three years ago. Counting every penny is not how to win titles and the purse strings must be loosened in time, and the next two transfer windows could tell us a lot about what point of the project Elliott deem the club to be at.