Devil’s Advocate: Milan given a reality check in Europe that will only help the growth process

Those who were hoping AC Milan would have a fairytale return to the Champions League after a seven-year absence have abruptly had their expectations adjusted after three games.

There was certainly a lot of justified jubilation at the end of last season when Milan beat their supposed kryptonite Atalanta in the final game of the campaign to secure a second-placed finish and a place in Europe’s elite club competition for what feels like an eternity.

The problem with such a long hiatus is that it had severely damaged the Rossoneri’s UEFA coefficient and so the reward for getting back into the Champions League was a draw against the 2018-19 winners Liverpool, LaLiga champions Atletico Madrid and a team with proven pedigree in Porto.

Not to worry, because after all getting back onto the big stage meant that Milan were going to take a big leap forward in their project. The revenues would be used to bring in top players who would now want to come and play for a club who were back in a competition where they belonged.

The start to the season in the league has very much been one where the momentum has continue from the previous season, with seven wins in the opening eight games putting Stefano Pioli’s side in second place, but the reality check has come in Europe.

Breaking it down game by game, we start with the trip to Anfield and a match between two clubs who have combined for 13 European Cup/Champions League titles. Milan were rocked from the start and couldn’t deal with the intense press Jurgen Klopp’s side came out with, falling behind and struggling to get a grip in the game.

A penalty save from Mo Salah stopped what could have been a bloodbath and then the Rossoneri struck twice through Rebic and Brahim Diaz to carry a lead into half-time. The game management wasn’t there against a resurgent Liverpool in the second half who quickly equalised and won it with a moment of quality.

Then Atletico Madrid came to the San Siro, ironically as the last team Milan had played at home in the Champions League. Milan started perfectly; demonstrating the intensity, quality and creativity that has characterised Pioli’s side, and Leao’s goal was no more than the team deserved.

However, Franck Kessie’s red card before the break totally changed the complexion of the game, with Antoine Griezmann equalising and a controversial late penalty award allowed Luis Suarez to snatch all three points.

Last night’s defeat to Porto did not have as much drama, as a lacklustre performance was punished by Luis Diaz’s second half goal with 25 minutes left on the clock. 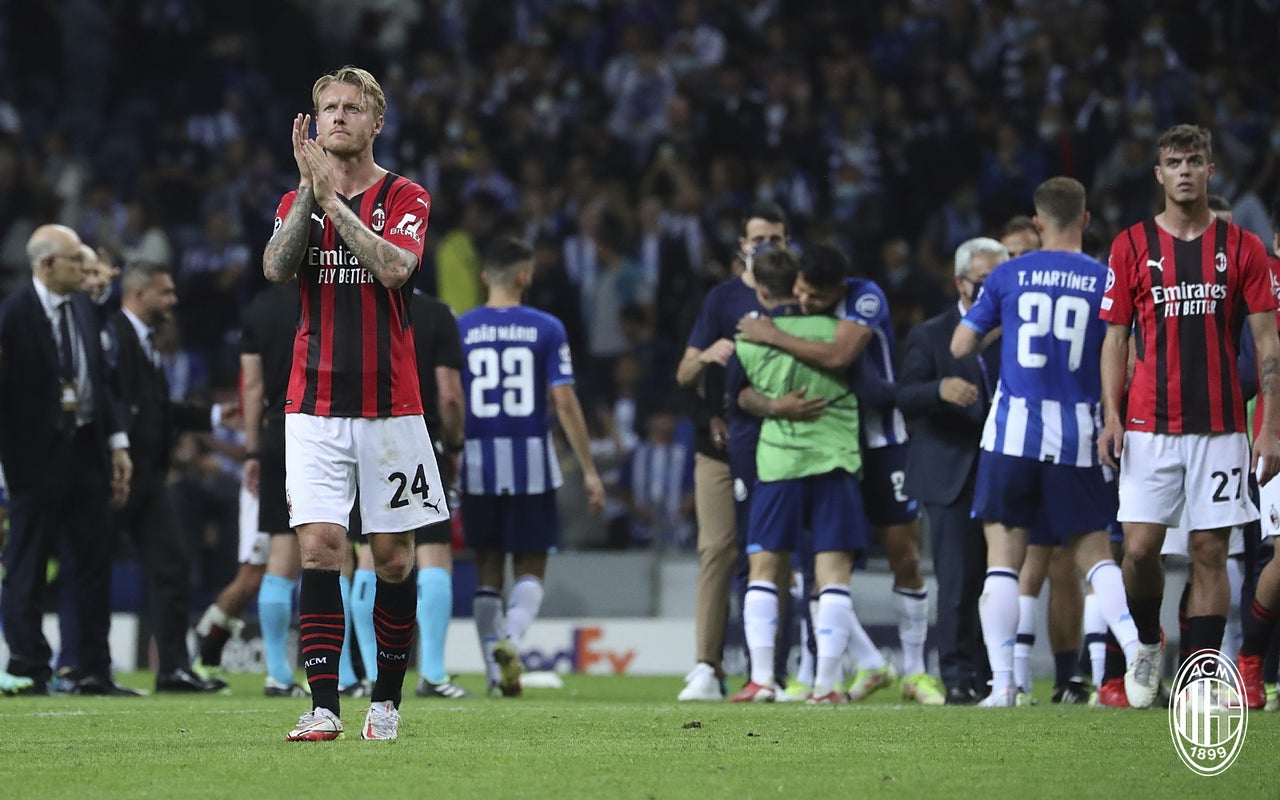 Peaks and troughs, controversial decisions, injuries and suspensions. The Diavolo have had it all in their opening three group games but the end result is this: zero points.

It can certainly be described as a reality check and a learning curve so far for Milan’s young core. After all, it must be remembered that aside from Ibrahimovic, Giroud and Kjaer, the core of Tomori, Calabria, Theo Hernandez, Bennacer, Kessie, Tonali, Saelemaekers, Brahim Diaz and Leao are all very young and virtually have zero experience when it comes to the Champions League,

If Milan were edged by a better side in their first game and can bemoan some dreadful refereeing in the second, the Porto loss definitely represented a step back. The lack of depth particularly off the bench was critically exposed as a determined, hungry and equally resolute Sergio Conceicao side used all the nous they have accrued in the competition to win.

It now means that progressing to the last 16 is an almost impossible task, but this is where the issue of expectations comes in. Having seen the draw – which was Milan’s own fault given the many years spent out of the competition – was finishing above two of Liverpool, Atletico Madrid and/or Porto really likely?

The gap in intensity between Serie A opponents and those who play in the Champions League regularly is clear for all to see. Milan have kept up with that for patches of their first three fixtures, yet have fallen short in all three too due to the aforementioned combination of factors.

The theme of the project so far has been patience. Patience in the head coach to develop an identity, a way of playing and to develop some of the young core, patience in the players themselves to adapt to Serie A and to Pioli’s ideas but also patience on the market as the clearing out of dead wood and the injection of youth continues.

That patience must also extend to the new forays that the squad undertakes. If fans truly and genuinely expected a deep run in this competition, then this will have been a rude awakening for their naivety. The fact of the matter is that the team itself and the club needing reminding how competitive the arena is, how the levels raise and how – given the revenues available – some of the elite are almost playing a different sport.

Growth margins has been another theme of Milan’s time under Elliott Management; the growth of revenues and the accounts, of the management as leadership figures, of Pioli as a coach, of the young core, of the value of assets and of the club’s brand exposure as a whole.

The players will learn from their experiences how to manage games better in additional to their natural upward trajectory anyway, Pioli will also adapt his style and develop more ways to skin a cat, the directors will take on board what is truly needed for a fine-tuned squad and those in charge of the accounts will learn how to deal with having more money.

No season spent in the Champions League – no matter how good or bad the results are – can harm the growth process that Milan are going through at the moment. These players will emerge better after the storm, as will Pioli, as will the likes of Paolo Maldini and Ricky Massara who have seen the strength in depth it takes to compete on multiple frontiers.

By all means enjoy the excitement of Milan’s return to the Champions League and get fully on board the Scudetto train if you wish, but sometimes a reality check can serve very well in the long run.

Tags AC Milan
Related Articles
SMTV: Empoli Elation – Are AC Milan the most entertaining team in Serie A?
2 October 2022, 20:05
SempreMilan’s Player of the Month for September: Veteran comes out on top
2 October 2022, 18:24
Watch: Highlights of Leao’s MOTM-performance for Milan against Empoli
2 October 2022, 17:50
Serie A Standings