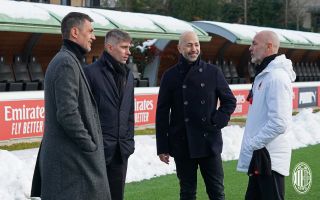 The Milan management have got a lot of things right so far during their time at the helm, and the general feeling is that the club are in safe hands with a virtuous and exciting project to get behind.

The playing squad has got younger and there is now a core of exciting talent that could be pillars for the next decade, while the club’s accounts have improved drastically over the past 12 months, there is a general trend towards being more sustainable and the results on the field are a marked improvement from the 2013-2019 era too.

However, there is one area where the likes of Paolo Maldini, Ricky Massara, Ivan Gazidis and Elliott Management have drawn some criticism and that is their handling of contract renewals. Over the summer, many were baffled at how Gianluigi Donnarumma and Hakan Calhanoglu – two assets with a substantial market value regardless of the opinions of them in hindsight – were allowed to walk away without generating a penny in transfer fee.

There was an overriding sense of acceptance though, as the club had not sold their soul to satisfy greedy agents and players who cared more about money than being part of an exciting movement. Now, a few months later, panic is resurfacing again.

It begins with the saga surrounding Franck Kessie, who has less than nine months left on his contract and continues to be linked with virtually every top club in Europe given that he has been one of the best midfielders in Italy over the past 18 months and is only 24 years of age.

Then there is Alessio Romagnoli, a centre-back who has not had the best of times since the start of the year and Fikayo Tomori’s arrival to displace him, but a player who is in his prime at 26, has appearances for Italy under his belt and is the club captain. In short, he would have a market.

Could history repeat itself and Milan lose two players worth potentially €100m+ combined on the market without getting a penny back all over a matter of principle? That we will find out over the next few months, yet what is clear is that something must change moving forward.

Maldini and Massara’s strategy of biding time and waiting for the right moment to negotiate contract extensions could be described as cautious if being generous, or naive if being a tad more scrutinous of their approach.

While the list of players whose contracts are expiring in 2023 is not the most daunting, 2024 is a different story as Rafael Leao, Theo Hernandez, Ismael Bennacer and Alexis Saelemaekers all have less than three years to run on their deal now.

That is a lot of time of course, though only if used wisely. This may be alarming to some and it shouldn’t be, but there should be no surprise when the discussions to renew Leao, Theo and Bennacer drag on because they want a big pay increase and have offers from other top clubs to use as leverage.

Proactivity is always better than reactivity and this is where the ball passes to Maldini and the management. When looking at future contract extensions, there are two paths that can be followed.

The first is the ‘insurance policy’ approach; one perfectly illustrated and deployed by how Chelsea handle their contracts. Remember how hard it was to sign Olivier Giroud and haggle over Tiemoue Bakayoko? It was because the Blues triggered a unilateral club option to extend their deal by a year to protect against them leaving for free and essentially picking their own destination.

Imagine, for example, if Milan held an extra year option on Kessie or on Romagnoli. The advantages are obvious: they can ensure they get a decent fee for either should they want to leave, and if they had made their mind up on going then they can choose where to sell them. In economic terms, it makes perfect sense.

Of course, in order to get a player and his agent to agree to a club having a one-year option is another story but if it becomes an ‘across the board’ type of policy then it is easier to get players to buy in. As mentioned, Chelsea have got it to work perfectly.

The second approach is one that Fiorentina have made the headlines for in their handling of Dusan Vlahovic. Their owner is aware he has a valuable asset that lots of teams want, with a contract expiring in 2023, so he made his best offer ahead of time with a deadline for a response.

It was a way to shift the power back towards the club, and although in the end the answer was not what La Viola wanted as Vlahovic made it clear he will be leaving, it now gives them the next two transfer fees to capitalise on the queue of suitors and get a big return, plus plenty of time to plan for life without him.

There is certainly a strong case for bringing potentially contentious cases – like the Kessie and Romagnoli renewals – forward to the campaign prior to the final season of their contract. That window from 24-12 months left is a good time to sit down and work out the future, and if the visions differ then a solution can be found where everyone is happy.

The bottom line is that the Milan management have done a very admirable job in putting together the parts of what looks like a fearsome machine, but losing a couple of key cogs for nothing each summer while having to spend to replace them is not sustainable going forward, nor does it look good from an outside perspective.

It is time to take the front foot back, all with a firm eye on those players expiring in 2024 as a chance to try out a new strategy.

READ MORE: Ibrahimovic at Milanello despite being granted rest by Pioli – the aim for his return