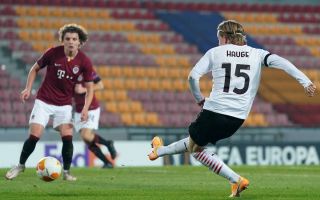 Devil’s Advocate: Pioli’s decision to exclude Hauge provokes anger – why he has got it wrong

There has been an outpouring of emotion on social media following Stefano Pioli’s decision to exclude Jens Petter Hauge from the Europa League squad for the knockout stages.

Without wanting to create a negative atmosphere in a delicate moment or blow anything out of proportion, the vast majority of the reaction from fans towards the decision has been negative, but first let’s explain the situation.

For the group stages, Pioli named 23 players in his List A squad for the Europa League with three List B players – namely Gianluigi Donnarumma, Matteo Gabbia and Daniel Maldini – who had come through the Rossoneri’s Primavera system.

UEFA have a quota system in place though whereby you can only name a certain number of players who did not come through academies in the country of that club (Italy, in this case). Due to the fact Andrea Conti, Mateo Musacchio and Leo Duarte left in the summer, it means Milan have one less List A spot in their squad due to the exit of the former.

Rade Krunic, Jens Petter Hauge and Soualiho Meite were among the obvious candidates to be cut from that last spot, and last night it was confirmed that the Norwegian has been chosen.

Trying to get inside Pioli’s head for a moment, there is perhaps some tactical sense to his decision.

Krunic offers cover both as an attacking midfielder, holding midfielder and even a winger if needed – at least on paper – while Soualiho Meite is a new signing who is an out-and-out defensive midfielder who is the deputy to Franck Kessie, so his presence was virtually guaranteed. Furthermore, Hauge can only really play wide on the left, the spot Ante Rebic and Rafael Leao occupy ahead of him now they are fully fit.

However, there is a very solid and compelling case that Hauge should be in over Krunic. First of all, the Bosnia international is at best the fifth-choice defensive midfielder on the depth chart (perhaps even Davide Calabria is ahead now) and the third-choice attacking midfielder, so in essence he should not really play unless things have gone very badly on the injury front.

We know that Pioli is an admirer of Krunic, but the bottom line is that he is unlikely to have a future at the club beyond the summer, given that he has become a square peg in a round hole; a player who doesn’t really fit anywhere rather than one that genuinely fits multiple roles.

Moreover, what kind of message does it send to a 21-year-old winger who has not only been impressive in European competition so far this season, but is actually Milan’s top scorer in the Europa League?

The papers this morning are claiming Hauge has accepted and understood the choice of Pioli and the coaching staff with great professionalism, which he had to really, but deep down he is understandably feeling disappointment.

Yes, he has been disappointing in his last couple of league starts (or rather, not put in a position to succeed really), yet Europe has been his elixir. Three goals in the group stages including the clincher at Celtic Park, a sublime winner in the return game against the Scottish champions and the only goal in a 1-0 victory away in Prague that ended up sealing top spot in the group.

It is not a very good message to send, and the reaction seen from supporters is very much a cocktail of anger, confusion and sadness that a player who has six goals in the Europa League this season has been left out in favour of a man in Krunic who is best remembered for his disastrous outing at San Siro against Celtic in which his giveaways cost two goals.

From a tactical point of view, who’s to say that Hauge wouldn’t have got his chance? We know by now that Leao and Rebic are also considered centre-forward options too, so there may well have been an opportunity for the former Bodo/Glimt man to come on and offer something different. To be creative and direct, bold and exuberant, because that’s what we have seen so far.

A winger in modern day football has to shuttle a lot between attack and defence and here we can see Hauge doing his defensive duties and picking Celtic players’ pocket pic.twitter.com/9bFWizsTbM

His defensive work-rate also deserves a mention, too. Hauge can often be seen tracking back from his advanced left wing position to fight for the ball, win it back and spring a break. If Milan are in a good position in a tie with half an hour left, would his energy not have been very useful?

Pioli doesn’t deserve criticising for much this season – in fact he has got 90% of things right – but this one is a head scratcher that hopefully doesn’t prove to be fatal.