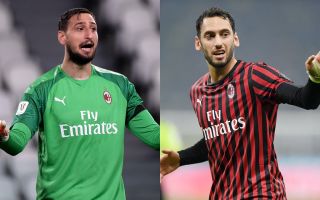 AC Milan are not prioritising a new deal for Zlatan Ibrahimovic at present as they have other objectives to focus on, a report claims.

Ibrahimovic continues to show his decisiveness on the pitch, as he has netted seven league goals in four starts already this season including three match-winning braces and a late winner against Udinese on Sunday.

Numerous media reports have suggested that Milan fully intend to try and keep the services of the Swede until the end of the 2021-22 season, and that Zlatan is in favour of signing a one year renewal which could be helped by a tax relief scheme that the government give to those who have worked in Italy for over two years.

Gianluca Di Marzio spoke to Sky Italia about the possibility of Ibrahimovic remaining at Milan into his 40s, with his comments transcribed by MilanNews.

“The speech on a possible renewal of Ibrahimovic, at this moment, is not a priority,” he said.

“The club are concentrating on other extensions, namely that of Donnarumma and Calhanoglu but in the last few hours there have been no great steps forward.”