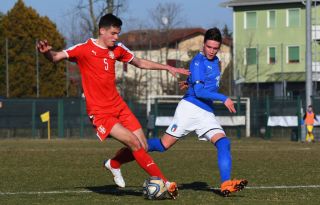 AC Milan have taken young Hertha Berlin defender Milan Kremenovic on trial with a view to potentially signing him this month, a report claims.

The Rossoneri were 2-0 winners against Cagliari on Saturday thanks to goals from Rafael Leao and Zlatan Ibrahimovic, but in the background the club’s hierarchy are continuing to work on potential market opportunities.

With Mattia Caldara’s departure to Atalanta now confirmed and Simon Kjaer having undergone his medical tests, the Rossoneri have now turned their attentions to the Primavera’s rearguard.

According to Gianluca Di Marzio – as cited by MilanNews.it – the club have taken Hertha Berlin centre-back Milan Kremenovic on trial.

The 17-year-old has played at U17 and U19 level for the Bundesliga side, and he will be evaluated in training in the coming days before the Rossoneri will make a decision on whether to register him.

Kremenovic has made 8 appearances in the U17-Bundesliga Nord-Nordest this season, and he also represents Serbia at U18 level.