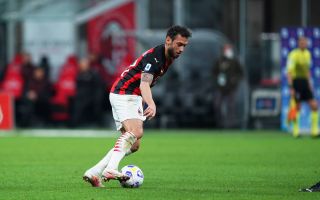 Hakan Calhanoglu’s contract will expire at the end of the season and given his importance, especially this season, Milan don’t want to lose him for free. A new deal is thus in the pipeline for the midfielder.

According to Gianluca Di Marzio, as cited by MilanNews, the negotiations with Calhanoglu started at a demand of €7m per year. Milan countered with €4m and their latest offer was €4.5m including bonuses, so it’s a matter of finding the right compromise.

Calhanoglu wants to remain at the club and the feeling is that an agreement will be reached in the end, per Di Marzio. As for Gigio Donnarumma, however, the situation is different and you can read more about that here.

For now, though, both players will have to focus on the season finale as Milan need to finish in the top four. They are in a good position to do so, but they still need to secure as many points as they can.

READ MORE: Hernandez reveals what happens when Ibrahimovic brings out his ‘god side’