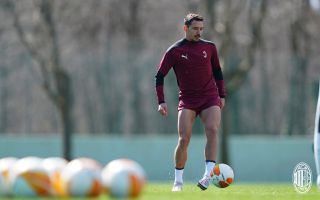 AC Milan have turned their focus back to the Europa League after the 1-0 defeat to Napoli at San Siro last night, and all eyes are on the injury situation.

According to the latest from Di Marzio, head coach Stefano Pioli and his squad have begun preparation in advance of the return leg against Manchester United. The boss has received good news ahead of the game, with midfielder Ismael Bennacer returning to the group. The Algerian will be available for the match.

Zlatan Ibrahimovic was also in training as he worked on separate fitness drills, while Alessio Romagnoli and Davide Calabria were also separate from the rest of the squad, with both players hoping to make a return before Thursday.

Mario Mandzukic on the other hand is unlikely to recover ahead of the match and therefore we could be waiting until after the upcoming international break to see him in action again.