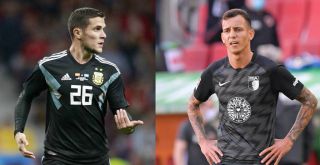 That is according to Gianluca Di Marzio, who claims that Castagna was there to represent two clients: namely Iago of Bundesliga side Augsburg and Fabricio Bustos of Independiente.

The former is seen as a solution to become the new back-up to Theo Hernandez given that the Rossoneri are having difficulties signing Matias Vina from Palmeiras.

Iago has made 10 Bundesliga appearances this season, having had numerous injury problems that did not allow him to accumulate minutes. In 2020, the Brazilian did represent his country at U23 level.

Fabricio Bustos meanwhile is a 24-year-old right-back who in Argentina collected 26 appearances last season. The player could become be an idea in case Milan sell any players in that role, such as Andrea Conti or Davide Calabria.

It appears the Rossoneri market is finally in motion.