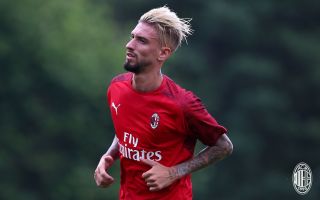 Sampdoria have opened talks with AC Milan to sign winger Samu Castillejo on loan, according to a report.

The journalist claims on his website that after the three signings carried out in the morning, the Genoa-based club are making an attempt with Milan to land Castillejo. A negotiating table will soon open between Sampdoria and Milan to find the best solution for the 26-year-old, who may have played his last game for the club last night.

The Spanish player collected 109 appearances and 10 goals with the Rossoneri, and he came on for the final 50 seconds of the 4-1 win over Cagliari, which could have been to give Giroud (who came off) a standing ovation but might also have been a farewell of sorts for Castillejo.

Not only that, but the Milan winger thanked the fans on social media by posting on Instagram: “I am and I will always be one of you.”

READ MORE: Milan in talks over permanent signing of Napoli winger but Faivre remains an option