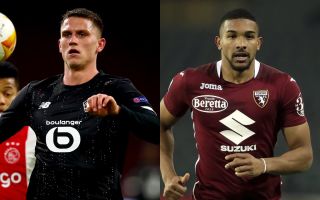 Di Marzio: Milan in no hurry but new attempts for Botman and Bremer are expected

AC Milan’s centre-back pursuit continues and has been slightly fueled by the injury of Fikayo Tomori. The defender will be out for a month but the Rossoneri are in no hurry to bring in a new player.

Milan have been linked with many names in this transfer window and there have been many different hypotheses. According to Gianluca Di Marzio, there are four main names on the Rossoneri’s radar currently.

The first two are Eric Bailly of Man Utd and Abdou Diallo of PSG. The former is available on loan and Milan could close by accelerating the talks. As for the Senegalese, however, he will only leave on an outright deal.

The priority and No.1 target of the Rossoneri remains Sven Botman, but it’s also the most complicated track. A new attempt is indeed expected and the relations between Milan and Lille are excellent. It remains difficult, though.

Bremer is the final name on the list and many of the recent rumours have talked about a summer move rather than a January one. However, with the current situation, Milan are expected to probe the ground here as well, but it’s also difficult despite the Pobega and Pellegri cards.

Paolo Maldini and Ricky Massara aren’t in a hurry and will make the right evaluations, but the certainty is that they want a defender this month.

READ MORE: Milan confirm Tomori will be out for a month following successful surgery