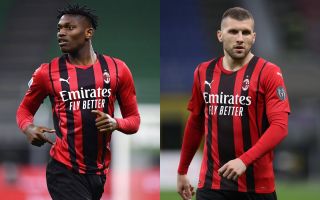 Di Marzio: Milan will rely on return of duo in January – no attacking signings

In the last few weeks, there have been many rumours about the incoming market of AC Milan next month. A signing for the defence seems certain, but the same cannot be said for a potential attacking reinforcement.

The Rossoneri have certainly missed the presence of Rafael Leao and Ante Rebic in the last few games, not getting the same press and deep runs without them. Fortunately, though, both should be back in early January.

This was reported by Gianluca Di Marzio, who also stated that Milan’s won’t make any signings for the attack next month. Instead, they will rely on the return of the aforementioned duo with the hope that they will stay fit.

It does make sense as there usually aren’t many questions marks with regards to the starting XI when they are available: either both starts (Rebic as CF) or one of them starts on the left-flank. Their return will also allow Rade Krunic to be an option solely for the midfield and No.10 role.