Donnarumma reduced to tears after hostile reception from Milan fans

Gianluigi Donnarumma found himself in the headlines once again during AC Milan’s 3-0 Coppa Italia victory over Hellas Verona.

Tensions reached breaking point over the summer when it was announced by agent Mino Raiola that Donnarumma would not renew his contract with the club and would leave for free in 2018.

However, the teenager did eventually sign a new deal after restarting negotiations with Milan directors Marco Fassone and Massimo Mirabelli.

Recent reports have suggested that Raiola is once again unhappy with the project at Milan and is looking to manufacture a big-money move for his client, and these rumours surfaced before the Coppa Italia Round of 16 tie against Hellas Verona.

Donnarumma’s name was booed loudly when read out by the PA system and he was the subject of insulting chants during the pre-match warm ups.

The Curva Sud also revealed a banner which translated to: “Moral violence, €6m per year and the signing of a parasite brother? Now go, our patience is finished!” 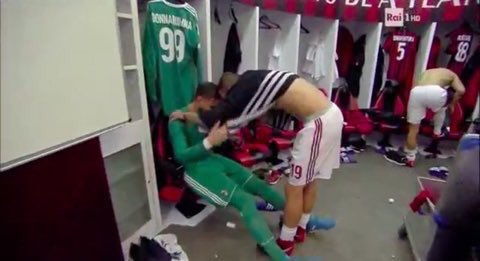