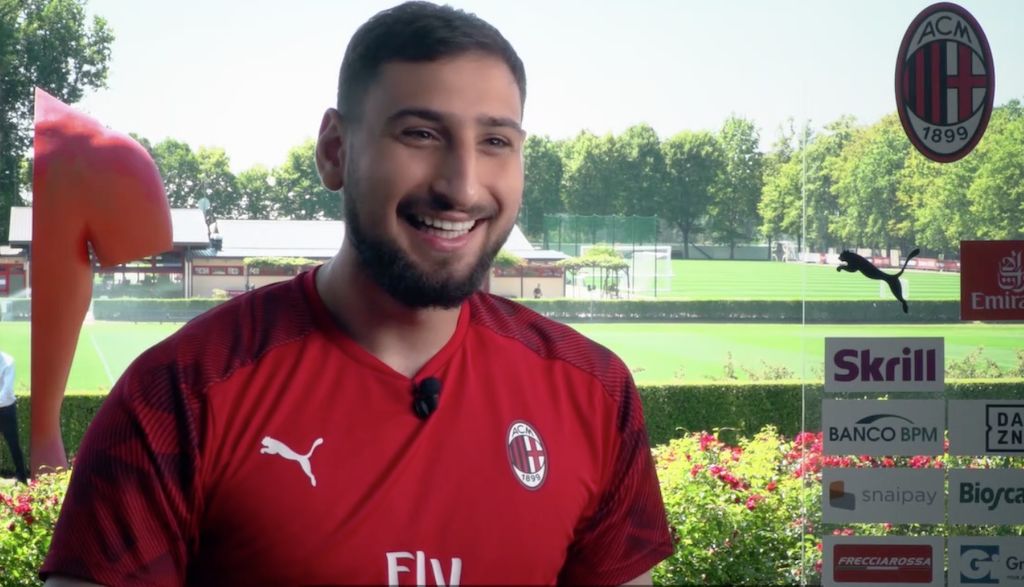 AC Milan goalkeeper Gianluigi Donnarumma brought up 200 senior appearances against Sassuolo on Tuesday night against the team versus whom it all began.

On the morning after the game, Donnarumma spoke to Milan TV about his career at Milan so far, reflecting on his growth and some of his best moments, with MilanNews transcribing his comments.

On his first outing in Serie A: “Ugly, it went well. Luckily it stayed there. I am excited to see those photos and see how much I have grown, I am really excited to have reached 200 appearances for AC Milan.”

On the amazing save to deny Milik: “This is my best save, for the moment and the difficulty. It was a very tight game with Napoli fighting for the title and we who had to try to bring points home. Very important game, it was the 90th minute and it was a decisive moment.”

On the dark moments: “There was something nonexistent about me and I think it really hurt me. At that moment Bonucci consoled me and told me that I shouldn’t listen to them and think only about the pitch and the match against Verona in the Italian Cup. I thank Leo because at that moment he helped me a lot. ”

On the penalty save to deny Ronaldo: “It was a wonderful emotion, shame about how it ended, but saving a penalty to one of the strongest players in the world I think is an exciting thing. I try to give my best.”

On the outburst after Juventus-Milan: “I was p*ssed off, it was an instant reaction, maybe you’re not thinking clear and I was deceived from a young age.”

On his first coach: “I find it hard to talk about my coac , because for me it was like a dad, an uncle, a grandfather. It was really everything, he was picking me up at three at home and brought me at 8.”

“I am very happy with the happiness that I am giving him. He is my first critic, immediately after the game, if there is something wrong he tells me, but he is a wild fan.”

On his fiancée: “We have been together for 4 years now. I can only thank her, because she supports me in everything, I am not easy at home.”

On Galliani’s exultation during Milan-Juve: “I have seen and reviewed it many times. I think it is number one, it has given me peace of mind and made me feel strong and important also given my young age.”

On the first derby: “I eased all my tension on the penalty. I was in seventh heaven, after the game I put my shirt in front of my eyes and started to cry. I was young and I was bold, I wanted to help the team and give everything I could himself. Now I’m older and I can better evaluate situations.”

“I am always with him, he is my family. We lost a few years together when I was a kid, but now we are recovering them.”

On the Golden Boy: “How much they reward you is always a pleasure, I hope it is not the last.”

On Ibrahimovic: “He is a beast, he spurs you a lot and helps you improve and give your best even in training. He is giving me a lot.”

On Abbiati’s farewell: “How much I cried. Christian gave me so much, he made the jokes that gave me the charge to help me.”

On the penalty saved on Dybala in Doha: “Incredible save, we won a great final. Maybe we could have won even earlier. It was the greatest thrill to win the first trophy.”

On his debut with the national team: “It was fantastic. Unfortunately we didn’t win the game, but it’s everyone’s dream. I feel proud and lucky to wear this shirt”

On the first penalty saved against Belotti: “I didn’t sleep at night. It was the first game of the season, and starting on the right foot was the most important thing, so this too, for the moment that now, I think is one of my fundamental saves,”

On Kjaer: “I have an extraordinary relationship with him, I think he is a great defender, he helped us a lot together with Romagnoli.”

On Mihajlovic: “We won 3-1 in Rome against Lazio and Mihajlovic was telling me something about the goal conceded. Sinisa gave me a lot, and from the tragic news of last year I was sure that he came out stronger, he is a warrior. He gave me so much, he tells you things to your face: a character like his in football is good for everyone.”

On his first official photo: “I had a swollen lip because I had fallen on an opponent.”

On the recent 2-2 in Naples: “I am very self-critical and therefore everything that happens to me I always try to find a point where I can do better. When you disconnect, you always try to improve. We took an excellent point against Gattuso’s Napoli.”