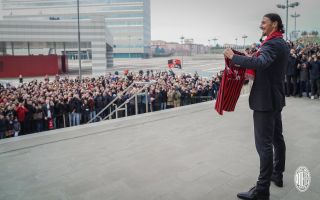 Zlatan Ibrahimovic is expected to stay at AC Milan, which initially came as a surprise to everyone. Just a few weeks ago, he seemed destined to leave but the cancellation of Ralf Rangnick’s arrival changed everything.

Of course, the actual reasoning behind keeping him isn’t a surprise to anyone, given that the Swede scored ten goals and got five assists after arriving mid-season. However, the club’s project seemed to go in another direction and his age led to speculations about retirement.

The 38-year-old, who will turn 39 in October, is well-known for his investments and ventures off the pitch – from his partnership with Samsung to investment in the betting site Bethard, which recently stopped operating in the UK.

“Advertisers love working with sports stars due to their mass appeals to audiences, states a spokesperson from online casino PlayFrank.

“Zlatan Ibrahimovic is a global name; it is no coincidence why brands and companies are willing to pay huge money for the footballer to be the face of their product. Despite his age, the Swede continues to prove that he remains one of the best footballers on the globe. His image is as strong as it ever has been.” – (Source – https://www.playfrank.com/en-gb)

In other words, I’m sure Ibrahimovic would have had his hands full even in the event of retirement, although we all want to see him on the pitch. Despite his age, he has proved that he can make a difference at the highest level and it remains to be seen how he will perform next season.

“I’m like Benjamin Button, I never get old. I’m always young (laughs),” the striker recently said in an interview.

And he’s not wrong. In fact, the stats prove that Ibrahimovic has improved with age. Out of the 536 goals in his career, 316 were scored after he turned 30. That being said, he’s at the end of the line and it will be interesting to see how long he can continue. Knowing his persona, I wouldn’t be surprised to see him for two more seasons.

Stefano Pioli and Ibrahimovic have each other to thank for the Rossoneri’s change of plans, that’s for sure, as the season restart really was too good to ignore. Their relationship seems to be very good and the striker is obviously a good ally to have for the manager.

For the first time in several years, Milan have a very good foundation to build on and the transfer window will be important in that regard. We can be sure that Ibrahimovic will make some demands in the renewal talks, as he’s always been a competitive player that wants his team to strengthen where needed.

The pressure is certainly on the Rossoneri to do well next season, especially considering their form as of late. Yes, he’s very experienced, but it will also be a test for Ibrahimovic as he can easily become subject to criticism. Of course, this usually fuels him and we can only hope that he will continue to beat the odds next season.