AC Milan opened their 2018-19 Europa League campaign with a narrow 1-0 win over Dudelange in Luxembourg.

The Rossoneri had plenty of opportunities during the game, particularly in the first half, but were often wasteful in the final third.

In the end, it took a deflected strike from Gonzalo Higuain just before the hour mark to give Milan the lead, an advantage which would prove to be enough to put the Diavolo top of the group after Olympiacos and Betis drew.

Gennaro Gattuso’s side as expected began on the front foot, and Gonzalo Higuain should have scored in the 12th minute when he found space to shoot from edge of the box after neat exchange, however the Argentina fired just wide of far right post.

Two minutes later Samu Castillejo was found at the far post by a pinpoint Diego Laxalt cross, but his header was well blocked by the backtracking defender.

Tiémoué Bakayoko then seemed to charge through on goal a few minutes later, but his dinked attempt was saved well by Joe Frising in the Dudelange goal.

Castillejo had another chance when he struck a half-volley sweetly; Frising saving well at his near post, but the referee rather laughably awarding a goal kick. 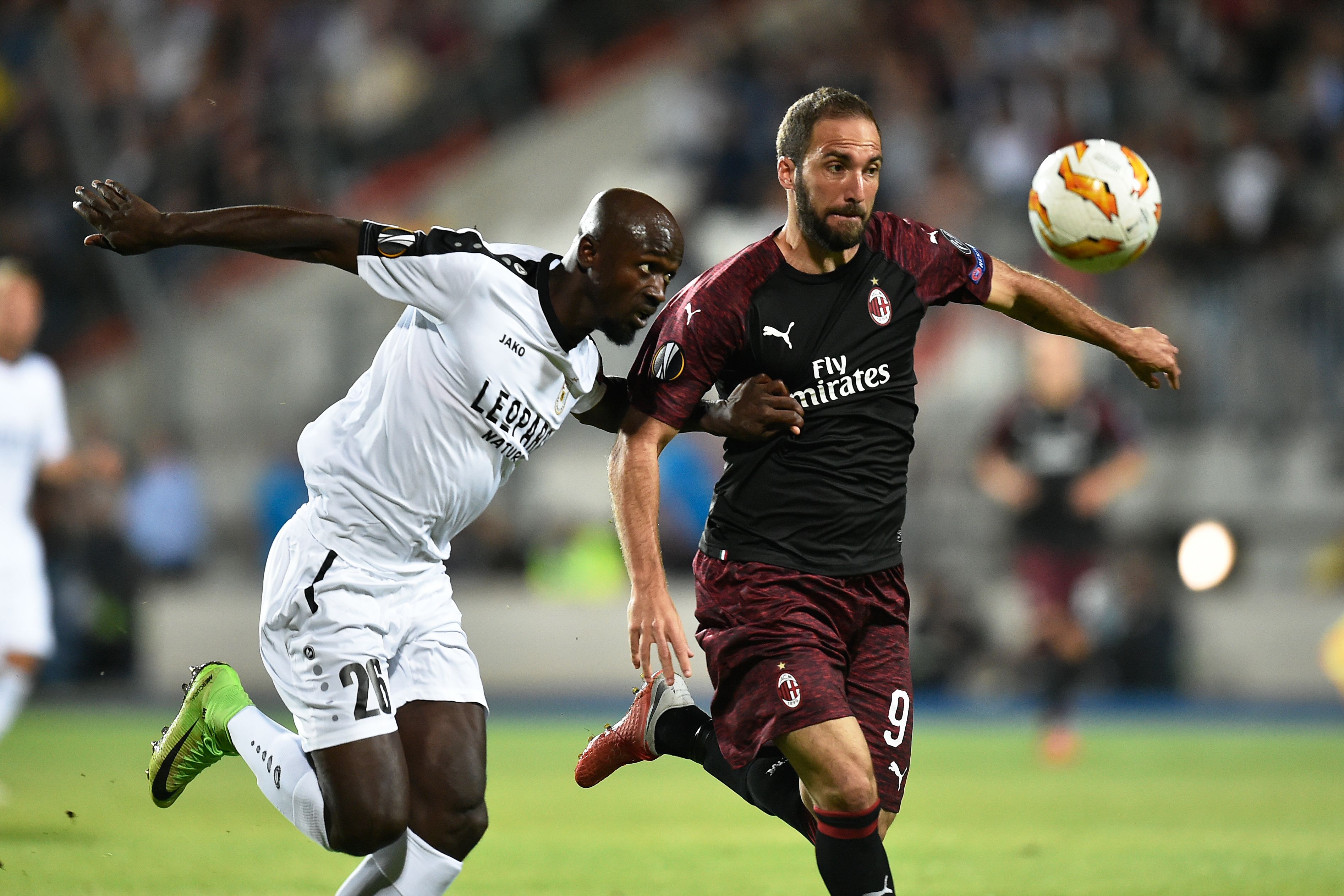 There was a half chance for the home side through Stolz when he was played in behind – the forward fired over, but replays showed that Milan were right to be angry about the lack of an offside call.

Mattia Caldara had a free header from a corner five minutes before the break, though he couldn’t get over the ball and headed comfortably over, spurning a golden chance in a frustrating first 45 minutes.

Five minutes into the second half, the Rossoneri came closest to taking the lead as Laxalt was spotted in space, and his low ball found Higuain, but a great save by Frising denied a certain goal.

Just before the hour mark, Milan did find the opener. The ever-present Castillejo was picked out on right side, and the Spaniard ran into the box and pulled back for Higuain whose shot deflected off a defender and in under Frising.

It could have been 2-0 five minutes later as Castillejo whipped a ball to far the far post, where a sliding Fabio Borini couldn’t quite divert his effort on goal from a tight angle.

Not long after there was almost a carbon copy of the previous chance as another inswinging Castillejo ball found Borini, yet this time the former Liverpool man hit the post with his sliding attempt.

Jose Mauri – who was impressive overall on the night – tested Frising with a volley from outside the box, but it was an easy save.

Higuain really should made it 2-0 and wrapped up the three points in the 83rd minute when he was found by a pass from Borini, but the No.9 couldn’t beat the keeper after rounding the last defender.

The home side did have a final half chance as a ball found Couturier inside the box at the far post, but his volley was way off target and eventually went out for a throw-in.