AC Milan dropped yet more points from a winning position as they drew 1-1 with strugglig Empoli.

Milan took a first-half lead as Lucas Biglia thundered in an effort from outside the box.

Seemingly in control, a giveaway from Alessio Romagnoli then gifted Empoli the chance to equalise from the spot, which Francesco Caputo did.

Suso was denied several times in the closing stages by some amazing saves from Peitro Terracciano as the home side held on.

The Rossoneri took the lead with the first real opportunity of the game in the tenth minute following a slow start to the game. A marauding run from Diego Laxalt result in a cross that was not properly cleared, and Biglia stepped up to slam the ball into the top-left corner via a slight deflection to make it 1-0.

Milan continued to dominate possession, but played with the ball mostly in their own half as the home side deployed a high press to stifle the shape of Gennaro Gattuso’s side.

Nerves began to creep in, and Gianluigi Donnarumma had to bail out his teammates for overcomitting when he rushed out to stop a shot from Antonio La Gumina who had been put through on goal.

Empoli hit the post on the half hour when Caputo’s volley at the far post following a cross from Bennacer, with replays suggesting Donnarumma may have got a touch.

Moments later, Peitro Terracciano was called into a double save as first Giacomo Bonaventura was denied with a low shot, and then Franck Kessie looked to have put the rebound in only for Terracciano’s outstretched arm to deny him. 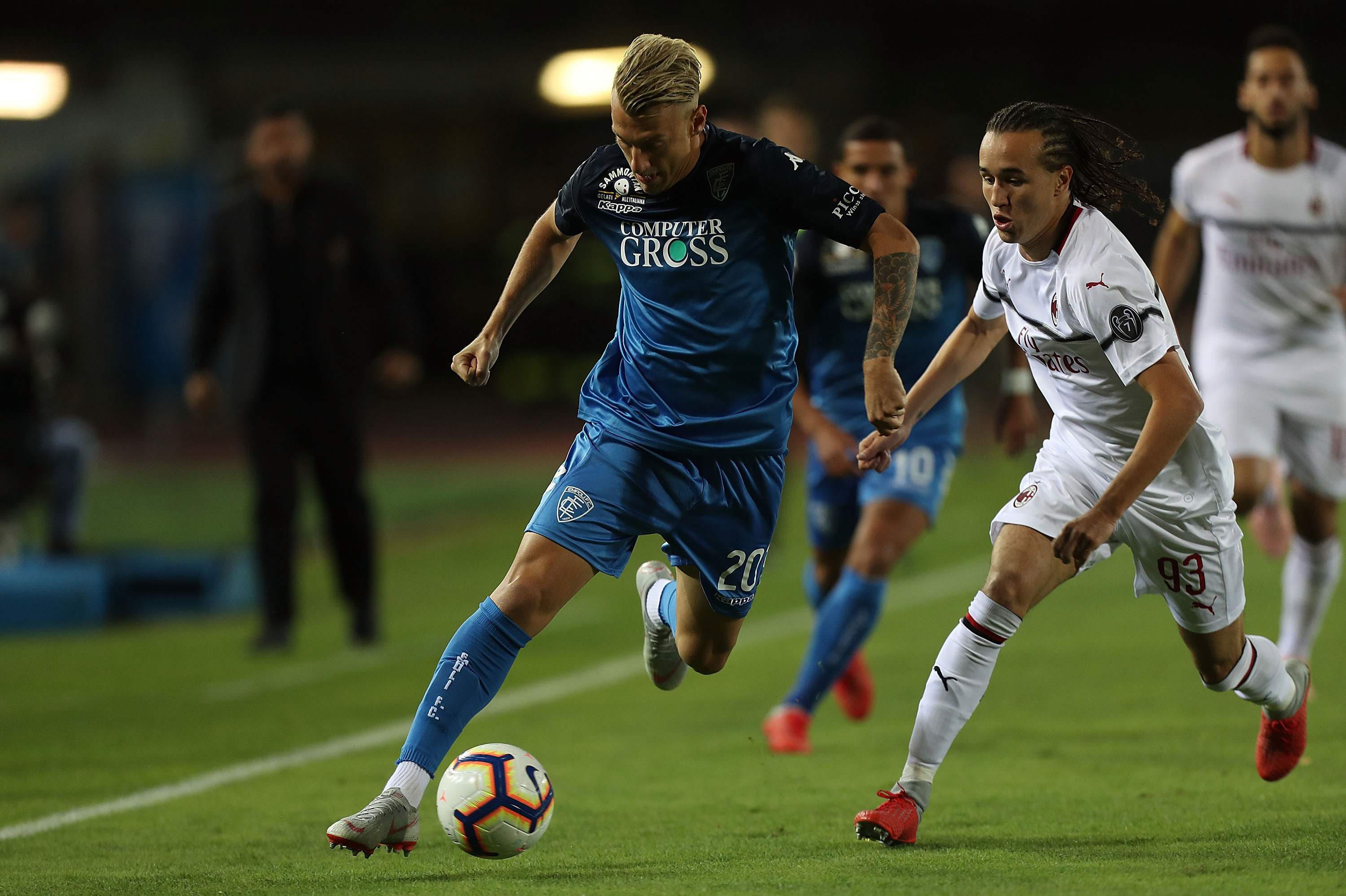 From the resulting corner the same duo were invovled for Milan as Bonaventura glanced a header that seemed to be heading in but was again well blocked, and Kessie fired the rebound over.

Terracciano continued his inspired performance before the break, saving from a venous Suso effort before then being called into action to deny the Spaniard again, this time with a low drive that was heading for the bottom-right corner.

After an opening to the second half devoid of quality, Empoli were offered a chance to equalise from the spot. A mix-up at the back saw Alessio Romagnoli hit the ball straight at Mchedlidze, before Biglia then brought down Caputo inside the area. After a lengthy VAR check, Caputo dusted himself down and fired the spot kick home emphatically.

Samu Castillejo and Patrick Cutrone were instantly brought on, and the former was in the action almost straight away as he dragged a shot wide from 25 yards.

By this point, Suso and Terracciano in the Empoli goal were arch enemies, and he made yet another smart save to deny the former Liverpool man’s stinging volley.

The 28-year-old goalkeeper then denied Suso again inside the last five minutes with his curling shot heading inside the far left post but for a full-stretch save.

He had chance to thwart Suso one more time, this time from a low shot inside the box, and the best save of the lot.